Ukrainian refugees are living in a 15th century Galway castle

Fit for a king! Irishman who traveled to Poland to help now housing 11 Ukrainian refugees in his County Galway castle. 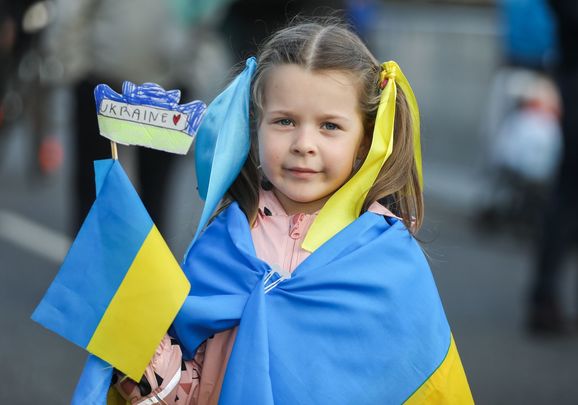 Ukrainian Oleksandra Liskova (5) at a protest outside the Embassy of Russia in Dublin. RollingNews

An Irish family has taken in 11 Ukrainians having traveled to Poland to do their bit in the war against Russia. Now Barry Haughian, his wife Lola and their children are trying to create some kind of normality for these refugees in the 15th-century castle of Ballindooley in County Galway.

Since the Ukrainian families arrived, five have found jobs, the children are enrolled in school and the locals of Galway have been treating them to a a "Céad Míle Fáilte" (a hundred thousand welcomes) that Ireland is famous for.

Around 25,000 Ukrainian refugees have arrived to Ireland, according to the Irish Examiner, since the Russian invasion at the end of February. The Irish government expects this number to quadruple, which would see Ireland's population grow by two percent. It's thought that Ireland will soon have to house the refugees in conference centers and sports halls. Not quite a 15th-castle outside Galway city.

Just over a month ago, Haughian and his wife Lola watched on TV as Ukrainians fled their now war-torn country. They wanted to help but had no space in their Madrid home. However, their second home a six-bedroom castle in County Galway.

Haughian hopped on a plane to Poland and set up a Facebook account trying to reach out and offer help. He gathered four families, 11 people, from Dnipro and Zaporozhye and brought them back to Ireland.

He told Reuters "We were emotional wrecks for probably more than a week. We weren't sure what we were doing, and just trying to make things better for them."

He added "every week it gets better... You can see the weight coming off their shoulders. We've got people dropping in all the time trying to help them. It's a real 'céad míle fáilte'."

When Irishman Barry Haughian and his Spanish wife Lola watched Ukrainians flee their homes but had no space to help in their house in Madrid, they decided to offer up their second home instead - a 15th century castle in the west of Ireland https://t.co/jDhfH3AsQD pic.twitter.com/IWRQnrpS3L

Among those staying at the castle is Maria Nazarchuk (20) who had been studying financial accountancy before the war. She has helped with translation for the group along their journey and told RTE they're one "big happy family".

The student told Reuters of the sounds of bombing and her three-day journey to get to the Polish border where she had a 28-hour wait to escape. Now Nazarchuk is working at a garden center near the castle. She hopes to continue her studies at the National University of Galway in September.

She told Reuters "When we are going to go to another country, I cried because it was very fast. I plan my actions, what I do with friends, with family, with university, and one day I have no plan...

"Irish people are very friendly, very kind. All the people want to help us. I (am) very happy here. I have a good job, a good home. I never thought that someday I will live in a castle."