Violetta (86) was forced to separate from her best friend Tasha, a 13-year-old black labrador-cross, while fleeing the Russian invasion of Ukraine, but the pair finally got to be reunited. 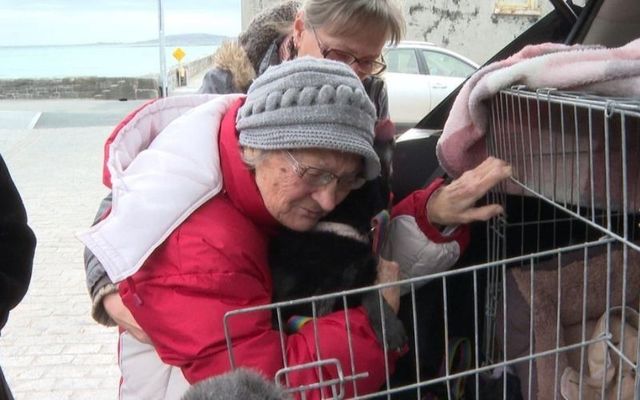 Watch the moment an elderly Ukrainian refugee was finally reunited with her beloved dog in County Clare.

Violetta (86) from Odesa in Ukraine, was forced to separate from her best friend Tasha, a 13-year-old black labrador-cross, while fleeing the Russian invasion of Ukraine with her family.

The pair were forced apart in Romania because the elderly grandmother was unable to physically carry Tasha any further and a local family kindly agreed to care for the dog.

Violetta and her family eventually found refuge in County Clare thanks to charity worker Debbie Deegan who helped the group get to Ireland.

After witnessing how distressed Violetta was that she had to leave Tasha behind, Deegan made every effort for the two to be reunited.

“Please forgive me for leaving you, I had no choice”.

"She was not coping well without Tasha. We contacted the family in Romania and then Waterford man John D'Arcy fundraised to pay for a company to transport the labrador across eight borders," she said to RTÉ.

D'Arcy traveled to Britain yesterday with dog handler Ser'anne Walsh to bring Tasha on the last leg of the rescue mission back to Ireland.

On Sunday, March 10, Violetta sat patiently, wrapped up in a red puffer jacket and with a ball in her hand, waiting for Tasha to arrive in County Clare.

Speaking to Newstalk, Ms. Deggan said that Violetta "immediately started to cry and to be honest we were all blubbering when it happened, it was so emotional.”

“I mean the dog has been through about ten borders at this stage. She had no idea who anyone was anywhere. She had four days in the back of the van in a cage. Her back was a bit sore but she’s grand. She’s perfect.

“When she saw granny she just completely lit up. All she started to do was this mad licking of Violetta’s face," she said.

The beautiful moment, which was captured on camera, shows Violetta hugging Tasha and saying to her, “Please forgive me for leaving you, I had no choice”.

"It's been a very long journey for her - she has been on the road for two weeks - but what a wonderful happy ending to see Tasha reunited with Violetta today," Ms. Deegan said.