Patrick Creed, a 54-year-old retired Army Ranger who fought in the war in Iraq, said he was inspired by the "ferocious bravery" of the Ukrainians. 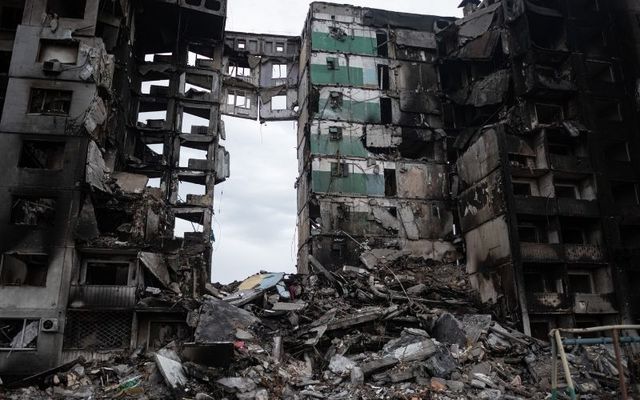 A suburb in Kyiv lies in ruins following the Russian invasion of Ukraine. Getty

An Irish-American veteran who traveled to Ukraine to fight against the Russian invasion has revealed that he was motivated by the "awful sights of what the Russians are doing".

Patrick Creed, a 54-year-old retired Army Ranger who fought in the war in Iraq, said he was also inspired by the "ferocious bravery" of the Ukrainians.

A native of Havertown in Pennsylvania, Creed reached out to the Ukrainian Embassy in Washington to offer his services to the Ukraine Foreign Territorial Brigade.

Creed told Daily Times that his decision to join the Ukrainian resistance was prompted by a "great leap of faith", adding that he had no "detailed information or clear plan".

He has joined a battalion of foreign fighters in the Ukrainian army, including soldiers from Britain, Ireland, and Canada, and said he was entrusted with organizing and training the soldiers in addition to planning combat operations.

Creed described his comrades as "brilliant, amazing, and hilarious" soldiers with lots of combat experience.

However, he said there are six different languages in his group and added that no one speaks any Ukrainian, making communication difficult.

Creed received Ukrainian papers from the Ukrainian military in addition to an AK-47 dating back to Yugoslavia in 1984. He received a donation of body armor from a local US company before leaving for Ukraine.

He said Ukrainians were showing commendable bravery in the face of the Russian invasion but added that the brutal fighting and artillery fire were unnerving for people with no experience of warfare.

"It is horrifying to see the damage done to towns and cities by the Russians. Ukraine deserves the support of the world for their bravery. They fight like lions every day against an overwhelming brutal attacker. They did nothing to deserve this," Creed told Daily Times.

Creed spends most days clearing buildings and houses of suspected Russians and said he always has to be ready to run for shelter during air raid alerts.

He added that his experience in Iraq has been a "huge help" to him in dealing with the sights of dead civilians scattered on the streets.

He also said his wife Michele and family have been very supportive of his decision to join the fighting.

"My wife, Michele, has been amazingly supportive. She understands me better than anyone I’ve ever met. Michele is probably one of less than 20 American women who is married to a member of the Ukrainian Foreign Legion," he told Daily Times.