“Z, the symbol of killings & atrocities, must be prohibited by law in every democratic state.” 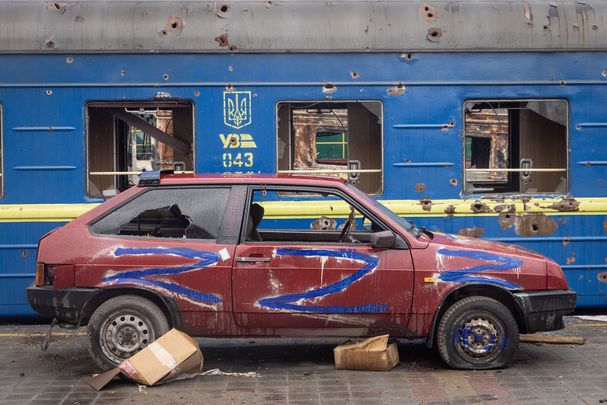 A car scrawled with the symbol "Z" at a former Russian base, the central train station in Trostyanets, in Ukraine. Getty

The Ukrainian embassy in Dublin calls for "Z" signs, meaning “for victory”, to be banned and slams Russians in Ireland for showing disrespect to those Irish standing with Ukraine.

Footage of over a dozen cars flying Russian and Irish flags as well as the "Z" symbol driving through north Dublin was uploaded to the social media platform Telegram on Sunday.

It's believed the cavalcade gathered near Dublin Airport, in north county Dublin, at 2 pm on Sunday, Apr 10. The cars then parked at the Metropoint Business Park in Swords for a period. Among the vehicles was a Land Rover Defender 4 x 4 with the letter "Z" painted on the hood.

One video shows a woman holding what appears to be a handgun or an imitation handgun.

The Irish Times reports that one of those involved in the cavalcade claimed they had then traveled to County Cavan. However, that could not be confirmed. On TikTok photos were posted with claims there were 25 vehicles involved.

The Ukrainian embassy in Ireland tweeted “It’s absolutely disgusting that these Russians living in (Ireland) demonstrate their complete disrespect for country of residence &the Irish people who stand against Russia’s war in Ukraine.

“Z, the symbol of killings & atrocities, must be prohibited by law in every democratic state.”

Such rallies & ?? Z swastika should be prohibited! This “show” took place in Dublin today. @dfatirl https://t.co/1CCqtyHNn7

The video published by the embassy (above) originated within a private Russian Facebook group with approximately 19,500 members. The group purports to be for Russians in Ireland against censorship, TheJournal.ie reports.

It's believed the symbol comes from the Russian phrase "Za pobedy" meaning "for victory".

The symbol is now graffitied on billboards, clothing and apartment blocks in Russia and on Russian tanks or bases.

Another "auto parade" in support of Russia is said to be planned for May 7, starting again near Dublin Airport. This rally will be in honor of May 9, a day when Russia traditionally celebrates victory over the Nazis in the Second World War.  Russian President Vladimir Putin is expected to hold a victory parade on May 9 in Moscow.