Taoiseach Micheál Martin said the Putin regime is not just waging an "immoral and unjust war in Ukraine," but it is also "causing huge international instability around energy and food." 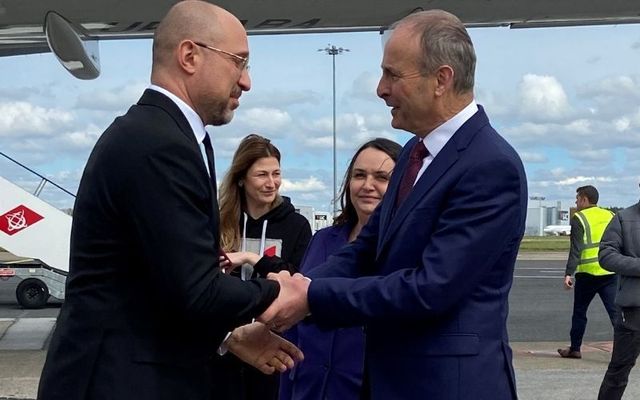 Taoiseach Micheál Martin met with the Prime Minister of Ukraine Denys Shmyhal in Ireland today to discuss the ongoing war and humanitarian crisis in Ukraine.

The two leaders held an hour-long bilateral meeting this afternoon at Shannon Airport before Prime Minister Shmyhal continued his journey to Washington, DC.

He gave me first hand account of shocking and horrific campaign of terror on civilians in #Ukraine by Putin’s regime.

I assured him of Ireland’s support for strongest sanctions against Russia and for Ukraine’s EU membership. pic.twitter.com/EOPTteCuCb

Following the meeting, the Taoiseach said: "Prime Minister Shmyhal gave me a first-hand account of events on the ground in Ukraine, of the appalling massacres in Bucha in particular, and the continuing attacks on civilians and on towns.

"Clearly the strategy of the Putin regime is not just killing people in an immoral and unjust war in Ukraine, but of causing huge international instability around energy and food.

"The Prime Minister outlined some clear objectives, around financial support to enable the Ukrainian Government to continue to feed its people, and to keep the economy going despite the enormous destruction caused by the war.

"He reiterated the need for support for Ukraine’s European application to join the European Union, and I assured him of Ireland’s strong proactive support.

"We also discussed a sixth round of sanctions to create further pressure on Putin’s regime to ensure the sanctions create a deterrent against the continuation of this war."

During the meeting, the Ukrainian Prime Minister also spoke of the need for international assistance and expertise to deal with clearing unexploded munitions and cluster bombs, as well as logistic support on excavating residential blocks destroyed by Russian attacks.

He reiterated the determination of the Ukrainian Government to protect their people and resist the ongoing aggression by Russian forces in the Eastern region.

The Taoiseach and the Prime Minister's meeting comes two weeks after Ukrainian President Volodymyr Zelenskyy addressed the Irish government. In his address, Zelenskyy said: "although you are a neutral country, you have not remained neutral to the disaster and to the mishaps that Russia has brought to Ukraine."

There are now 24,438 Ukrainians in Ireland, RTE reported on Wednesday, with 1,271 being accommodated in emergency beds. The Cabinet heard on Wednesday evening that based on predictions, there will be a shortage of accommodation for Ukrainians arriving in Ireland

by the end of the month.