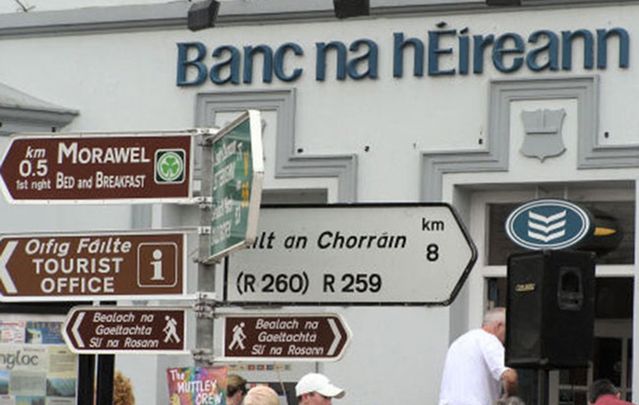 Like most visitors to Ireland, the first words in Irish I heard on arrival were “Cead míle fáilte,” which means “A hundred thousand welcomes.”

During my time in Ireland, I tried to to follow the advice, "labhair cibé Gaeilge atá agat," which means "speak whatever Irish you have."

The most obvious place in Ireland to speak Irish is the Gaeltacht, one of the government recognized Irish-speaking areas. The boundaries of the Gaeltacht were drawn by the Irish Free State after the War of Independence. The Gaeltacht has reduced in size over the years due to various reasons including the state’s continued use of English.

The more Irish you have under your belt, the more you will get from the experience, because the locals speak English often. Be careful of which dialect of Irish you study, and what part of the Gaeltacht you are visiting. Although it is a small country, there are many different accents and a couple of different dialects of Irish. These might throw you for a loop the first time you hear Irish spoken if you are not familiar with certain dialects.

Since Irish is the official language, street signs and plaques in national museums are printed in both Irish and English. The Irish text on road signs is italicized, whereas the English is in bold and all caps and attracts your eye’s attention first.

I went to the Gaelic League (Conradh na Gaeilge) bookstore near the top of Grafton Street to pick up an Irish grammar book and all of the shelves were labeled in Irish - it was pleasant to see the language used, but also bewildering since I didn’t know the vocabulary. The clerk greeted me with “Dia duit! Conas atá tú?" ("Hello! How are you?") and it was nice to hear Irish spoken in the capital. After exchanging pleasantries in Irish, I switched to English to explain what I was looking for.

As part of my trip, I spent a weekend in Northern Ireland, where Irish is spoken in some parts. I exchanged a cúpla focal (couple of words) with a friend’s friend, who had previously taught Irish in the United States at Kelly’s Cellars in Belfast. Kelly’s boasts as the meeting place of the United Irishmen who led a quickly crushed rebellion in 1798.

Despite some of my pronunciation mistakes, it was a great experience, and "Is fearr Gaeilge briste ná Béarla cliste" (Broken Irish is better than clever English).