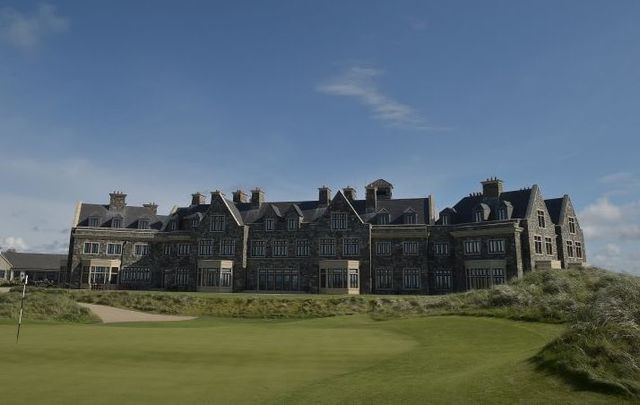 Trump's Doonbeg expansion has been cleared by the Clare County Council. Getty Images

The Irish Times reports that the expansion will roughly double the size of Trump’s Irish golf resort and add a new ballroom/function room, new restaurant and gatehouse, leisure facilities, and 53 more holiday homes.

The planning permission was granted to TIGL Ireland, a Trump Organization firm after it was originally requested about a year ago.

During the review of the request, Clare County Council sought more information about the environmental impact of the development in the area and the adjoining protected conversation sites, but the Council ultimately concluded there was “no likelihood of any significant effects on the environment arising from the proposed works.”

“The development at Trump Doonbeg is so badly needed. It should be a no-brainer for rural west Clare. Rural Ireland is suffering, and we are suffering a good bit."

McNally's pub welcomed the US President's two sons when they visited Ireland in June.

Read More: President Trump is beloved in this Irish town he saved from financial disaster

Both President Trump and Vice President Mike Pence stayed at Trump's Irish golf resort this year during their visits to Ireland. Trump, however, claimed he had "nothing to do with the decision" for Pence to stay at the Trump-owned Irish resort:

I had nothing to do with the decision of our great @VP Mike Pence to stay overnight at one of the Trump owned resorts in Doonbeg, Ireland. Mike’s family has lived in Doonbeg for many years, and he thought that during his very busy European visit, he would stop and see his family!

Are you excited to see Trump's Irish golf resort being expanded? Let us know in the comments!