President Trump retweeted an advertisement featuring his Doonbeg golf course this weekend, a move that critics are slamming as unconstitutional. 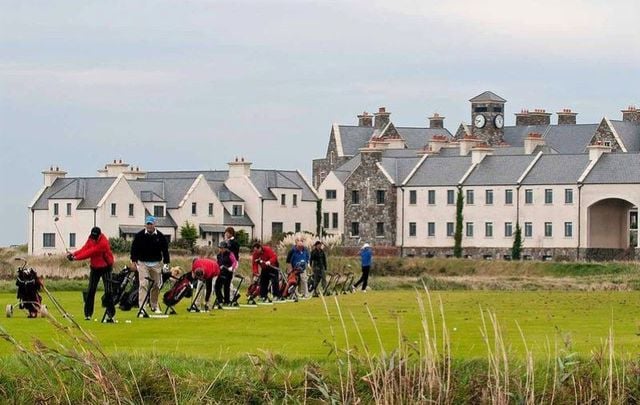 President Trump promoted his Irish golf course on Twitter over the weekend, a move that critics say could be unconstitutional. Ireland's Content Pool

Trump's promotion of his golf courses could be unconstitutional, say critics

President Trump has again promoted his Irish golf course on Twitter in a move that some critics are saying could be potentially unconstitutional.

On Saturday, July 13, President Trump retweeted the below tweet which promotes three of his golf courses, two of which are in Scotland and one of which is in Ireland:

Three of the most spectacular golf courses in the world ⛳ @TrumpGolf

Tune into @GolfChannel next week during @TheOpen to catch our latest commercial #TheTrumpTriangle pic.twitter.com/UQVtUgFpba

The tweet, which tags the @TrumpGolf Twitter account, hails the so-called “Trump Triangle” of golf courses as “three of the most spectacular golf courses in the world.”

The advertisement, which Trump shared with his more than 62 million followers, is set to air on The Golf Channel next week during The British Open which is being hosted at the Royal Portrush Golf Club in Northern Ireland.

Citizens for Responsibility and Ethics in Washington (CREW), a watchdog group, responded to the President's apparent promotion:

President Trump used an official statement on Twitter to link to a commercial for his golf resorts in Scotland and Ireland in latest example of what ethics experts have complained is Trump’s manipulation of his office to enrich himself and his family. https://t.co/4sIuQhFm3x

CREW asserts that President Trump's promotion of his golf courses, among his other business interests, is in conflict with the emoluments clause in the US Constitution which reads: "No Title of Nobility shall be granted by the United States: And no Person holding any Office of Profit or Trust under them, shall, without the Consent of the Congress, accept of any present, Emolument, Office, or Title, of any kind whatever, from any King, Prince, or foreign State."

Read More: Playing a round at Donald Trump's golf course in Ireland

Trump's' retweet comes only days after a federal appeals court tossed a lawsuit  against the President which was lodged by politicians in Maryland and Washington, DC accusing Trump of "illegally profiting from his luxury hotel in downtown Washington."

Bloomberg writes: “Had the court ruled against Trump, the Democratic attorneys general of Maryland and Washington may have gained more access to his finances to determine if he’d violated the so-called emoluments clauses.”

After the case was tossed, President Trump tweeted on July 10:

....serving and doing a great job as your President (including accepting Zero salary!).

Do you think President Trump is in conflict with the emoluments clause by promoting his golf courses? Let us know in the comments.