Irish ultrarunner Tom McGrath chats with Debbie McGoldrick of the Irish Voice about his life, career, and plans to 100 miles for charity in NYC in November. 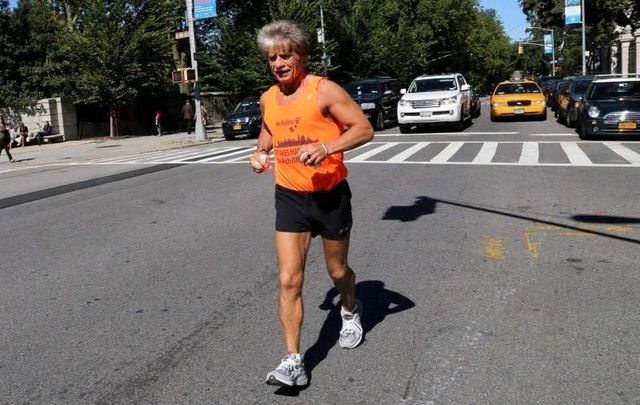 Ultrarunner Tom McGrath has led quite a life, and he’s going to clock some more miles next month by running four marathons in four days, including the New York City race. He’s also just released a movie about his life and times. He talks to Debbie McGoldrick about the highs, lows, and all in between.

Most marathon runners train for months building endurance to go the distance of 26.2 miles on race day. The thought of running four marathons in four days? Unthinkable for 99.9 percent of us mortals, but not for Irishman Tom McGrath.

One of the world’s best-known ultra runners, McGrath will hit the road with his feet yet again for four straight marathon runs. November 4, 5, and 6 will see him complete the distance at the Central Park Reservoir, and on Sunday the 7th, he’ll take part in the New York City Marathon.

Many of the physical endurance feats McGrath has undertaken have been in support of charitable causes, and that’s the case this time too as he will use his runs to raise funds for the Tunnel to Towers Foundation which provides mortgage-free homes to catastrophically injured veterans and first responders, and also to the families with young children of fallen first responders and military members.

McGrath, a native of Ederney, Co. Fermanagh who came to New York in 1970, is now 71 years of age. He’s run well over 200,000 miles in his life, including a 3,000-mile record-setting trek across America which doubled as his honeymoon.

He needs to train at least three to four hours a day in order to stay mentally satisfied, he owns an Irish pub in Manhattan which only reopened in August after the Covid-19 shutdown, he is taking care of his wife who is recuperating from cancer, and he’s a recovering alcoholic himself. Oh, and he just produced a new film about his life, Saved By My Feet.

How the heck does he keep it all together?

“Well, I’m hanging on like a loose button, hoping the button doesn’t fall off!” he laughs during a recent interview with the Irish Voice.

There seems to be no fear of that. The only thing slowing McGrath down is his advancing years. He remains remarkably injury-free and says that he won’t feel any pain after his November marathons “because my body is used to it after all this time. The fitter you are, the less pain there is.”

He grew up in poverty in Fermanagh but was always physically active; his college degree came in physical education. He taught for a while at home before moving to the Big Apple for good after spending summers here as a student playing at Gaelic Park.

McGrath did all kinds of things when he arrived in 1970 – construction work, cab driving. He eventually got into the bar business and has owned 10 of them. These days he and his daughter Kelli operate The Black Sheep pub/restaurant on Third Avenue and East 38th Street; the first bar he bought in the early 1970s was in Jamaica, Queens.

“I used to train boxers in Elmhurst, and when I got to the bar I had to box more,” he laughs.

McGrath attended the 1976 Summer Olympics in Montreal and became enthralled with the running events. He was always a pretty good runner but started to focus his life around the sport when he returned to New York, and it wasn’t long before he was planning two life-changing events for 1977 – marriage to Mena, literally the girl next door in Fermanagh, and a honeymoon cross country run from New York to the West Coast.

“I got married on a Sunday and began the run on the Monday,” he remembers, with Mena and two helpers following in a camper van.

It took McGrath 53 days and seven minutes to complete the 3,046-mile journey to San Francisco, a clip of 54.1 miles per day. He set a new world record and the media was there to meet him. Life couldn’t have been better, but dark days were on the horizon.

“The bottle didn’t get a hold of me. I got a hold of the bottle,” McGrath remembers of his descent into alcoholism. “The demons creep up on you and take hold, and I fed them with whiskey.”

It wasn’t unusual for McGrath to down a liter of vodka a day. There were fights, there were falls, some blackouts, even an arrest. His running suffered and his health took a serious nosedive in 2010 when he wound up at NYU Hospital and was told by a doctor that the damage to his body from alcohol was so severe that he’d be lucky to be alive in 10 days.

McGrath took the words as motivation, promising to change his life if he survived using his old reliables – his feet. He vowed to make a difference for other people in need too.

“It was a long process. I fell off the wagon a few times but I eventually succeeded. I realized I was on a suicide mission and it had to stop or I would be dead. You miss so much of life when you are drinking like that,” McGrath said.

He’s undertaken many grueling charity runs since, including a Dublin to Belfast one in 2019. The more time goes by, the longer it takes for McGrath to complete his runs, but he gets there.

“Age is definitely an issue. It will take me five or six hours to finish the marathons but I’m not in a rush. I’ll run and walk, run and walk,” he says.

“This will be the toughest run of my life because of my age. I want to get from A to B without injury. It doesn’t matter about how long it takes, just as long as you finish.”

McGrath trains three to four hours every day, a combination of running, lifting weights, stretching, and mental exercises “which are necessary for me to keep a positive attitude,” he says.

His days fill up easily with all the activity that includes looking after Mena and The Black Sheep which was walloped by Covid-19. McGrath says his business, open since 1998, is slowly but surely bouncing back.

“We closed on March 16 of last year and didn’t open at all until August. We couldn’t put tables outside for dining because of the bus stop. A lot of people still haven’t come back to the office buildings but we are moving forward,” he says.

Working on Saved By My Feet was a joy. McGrath’s life story is tailor-made for film treatment, and the 57-minute finished product was released on Google Play, YouTube, and iTunes on October 15.

“The movie is pretty intense and very truthful. I don’t hold back. I enjoyed every second of putting it together – my life, told my way,” he says. “You have to take every day and be grateful for it.”

His sole hobby? “Well, I don’t really have any – any free time I have I just sneak out and train some more so that’s my hobby!”

McGrath sleeps about five hours a night with his legs moving some of the time.

“I feel like I run a half marathon when I’m sleeping which my wife can attest to,” he adds.

What’s the next big run on McGrath’s calendar? The 2019 Dublin-Belfast journey was supposed to be his last, but McGrath keeps on ticking.

“I don’t have anything planned. I’m getting old. I’ll let you know!” he says.

“For my running life, it’s been God, myself, and the concrete. God gets the gold, I get the silver and the concrete gets the bronze. As long as I keep finishing in that order, all will be fine.”

You can support Tom McGrath's fundraising efforts for Tunnel to Towers online here.