The EU says its number one priority while introducing new Northern Ireland Protocol proposals is to protect the Good Friday Agreement. 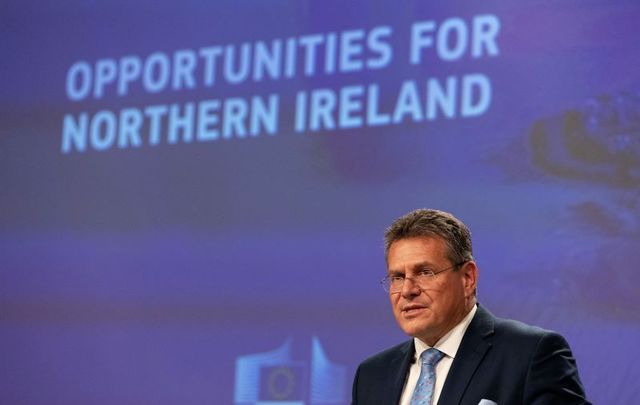 The European Commission says the package introduced today, which comes in addition to the measures introduced in June 2021, provides “predictability, stability, and certainty for the people of Northern Ireland.”

Additionally, “It lays the ground for a solution-oriented period of talks to jointly agree the way forward. It proves that the Protocol and EU law is flexible enough to find credible, creative solutions that make a real difference on the ground.”

He continued: “The EU has an unwavering commitment to the people of Northern Ireland and for this reason, to the implementation of the Protocol which brings about unique advantages of dual access to both the UK and EU markets.

“Ultimately, our number one priority remains to ensure that the hard-earned gains of the Good Friday / Belfast Agreement - I’m talking about peace, stability - are protected while avoiding a hard border on the island of Ireland and maintaining the integrity of the EU single market.”

“Today’s package has the potential to make real, tangible difference on the ground,” Šefčovič said, who went on to say that “in effect, we are proposing an alternative model for implementation of the Protocol.”

Commission experts will now travel to London to begin discussing these four non-papers in detail with the UK government in what will be the start of a period of intense discussions with the UK government over the coming weeks. Vice-President Šefčovič will meet Lord Frost on Friday in Brussels and the Commission will also continue to engage with stakeholders in Northern Ireland.

You can watch the European Commission's press briefing from today, October 13, here:

Afterward, Šefčovič said on Twitter that the EU "stands united behind Northern Ireland."

The EU stands united behind Northern Ireland, while also protecting our internal market.

I invite the UK government to engage with us earnestly on our package of enhanced opportunities. With these proposals, I believe we could be in the homestretch when it comes to the Protocol. pic.twitter.com/ECyhYYWB4I

According to the European Commission, the Northern Ireland Protocol "is a fully legally operative solution that avoids a hard border on the island of Ireland, protects the all-island economy and the Good Friday (Belfast) Agreement in all its dimensions, and safeguards the integrity of the Single Market.”

The Protocol is a portion of the agreed-upon Brexit Agreement.

Sir Jeffrey Donaldson, the head of the Democratic Unionist Party (DUP) in Northern Ireland which is against the Northern Ireland Protocol, responded to the developments today saying: “It is vital this new round of negotiations does not become another missed opportunity to make fundamental change and to replace the Protocol.”

EU has listened to Northern Ireland & will announce far reaching proposals to respond to very real concerns on Protocol.
I hope today can be a day to improve relations with NI business & Unionist community in particular. EU making a big effort here. https://t.co/bjncN6ZTRz