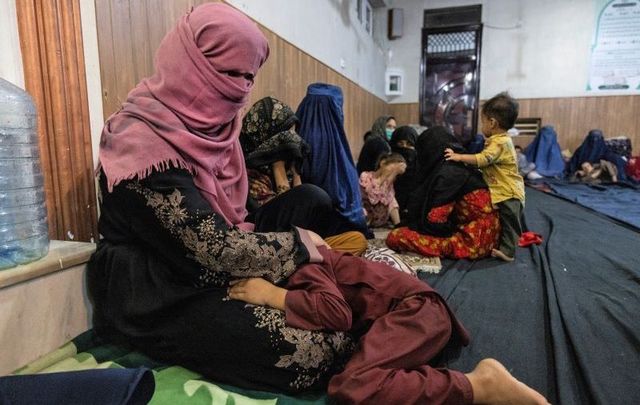 August 13, 2021: Displaced Afghan women and children from Kunduz are seen at a mosque that is sheltering them in Kabul, Afghanistan. Getty Images

Northern Ireland's political leaders say they are offering to help Afghan refugees however they can.

First Minister Paul Givan of the DUP said: “The pain and suffering we see in Afghanistan – among men, women, and children – is truly profound.

"Northern Ireland has not been found wanting when it comes to those seeking refuge or fleeing persecution. In the wake of the Syrian conflict, Northern Ireland took in more than 1,800 people – a higher proportional share than anywhere else in the UK.

“There has also been an increase in the number of asylum seekers arriving here independently, to seek refugee status due to an ongoing humanitarian crisis around the globe.

“And yet, we have all been moved once again by the scenes in Afghanistan. I am pleased to see a collective will across political parties to address the current situation. We are determined to work with our many partners across society and fellow administrations to offer what sanctuary we can.”

Deputy First Minister Michelle O’Neill, the Vice President of Sinn Féin, said: “It has been distressing to watch the unfolding humanitarian and refugee crisis in Afghanistan, and our hearts go out to the people who are clearly in a desperate situation, particularly the women and girls whose human and civil rights will be under threat.

“Our first instinct – both as politicians and as people – will always be to help those in need. That is why work has been ongoing to scope out what is required, and see what assistance we as an Executive can offer. We will be an important part of the response which will involve organisations at all levels, from the community grassroots right up to global agencies and governments.

“We are offering to help however we can, and we will explore every avenue, to play our part in helping those fleeing Afghanistan.”

Sir Jeffrey Donaldson, the head of the DUP in Northern Ireland, said today in the UK House of Commons: “Today is not a day for political point-scoring, it is a day for this House to reflect on what we need to do as a Parliament and a government to respond to this crisis.”

He continued: “I think that the people in Afghanistan, the people who are in desperation at Kabul Airport, don’t want to hear our point-scoring, they want to know what we are going to do to help them. And that is what we must turn our mind to.”

In the Republic of Ireland, Minister for Foreign Affairs Simon Coveney has committed to up to 150 visas for Afghan refugees, but has acknowledged that that number may need to be increased as the situation develops. Irish Aid yesterday announced  €1 million in humanitarian funding to Afghanistan.