Ireland to provide €1 million in humanitarian funding to Afghanistan

Ireland's aid to Afghanistan comes as part of a new, global appeal issued by the UN High Commission for Refugees (UNHCR). 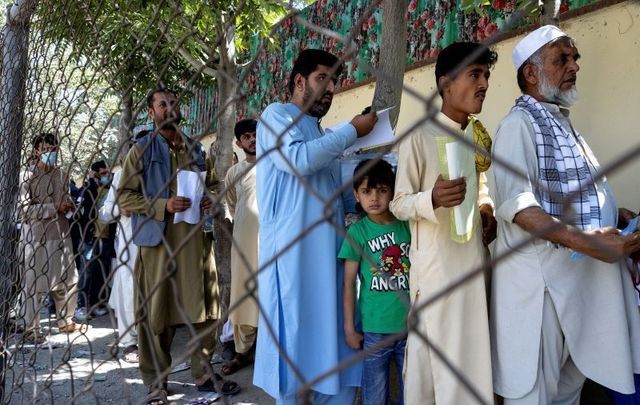 August 14, 2021: Afghans wait in long lines for hours at the passport office as many are desperate to have their travel documents ready to go in Kabul, Afghanistan. Getty Images

The funding, announced by Simon Coveney, Ireland’s Minister for Foreign Affairs, and Colm Brophy, Ireland's Minister for International Development and Diaspora, will be provided to the UN High Commission for Refugees (UNHCR) to provide urgent support to people in Afghanistan, as well as to those who have fled into neighbouring countries.

Ireland to provide €1m in humanitarian support for people of Afghanistan.

Funding will be provided to the UN High Commission for Refugees (UNHCR) to provide support to people in Afghanistan & to those who have fled into neighboring countries.

Minister Coveney said: “I have approved €1 million to the UN High Commission for Refugees for the people of Afghanistan.

"The situation in the country is incredibly worrying. Even before the events of the last few weeks there were already almost three million Afghans displaced from their homes by insecurity. That figure is now rising.

“Ireland will continue to engage, including at the UN Security Council, to support peace in Afghanistan and to protect and promote the human rights of all Afghans, especially for women and girls.

"Ireland has also called for full and safe humanitarian access to allow life-saving support to reach all Afghans, including to respond to the urgent needs of families forced to flee their homes.”

Minister Brophy said: “The UN estimates that nearly half of Afghanistan’s population are currently in need of life-saving humanitarian assistance.

"The situation is likely to worsen over the coming days and weeks as a result of the insecurity in the country. This funding will provide shelter and basic day-to-day needs for people in Afghanistan, as well as for Afghan refugees in neighbouring countries.

“Through Irish Aid, the Government has already provided €1 million in humanitarian support to people in Afghanistan this year.

“Today’s announcement of a further €1 million is in response to the unprecedented challenges facing Afghanistan.”

The Irish funding comes as the UNHCR has issued a global appeal for $62.8 million to respond to the current crisis in Afghanistan. Ireland’s contribution to the UNHCR appeal will support emergency response programmes in Afghanistan, as well as supporting Afghan refugees in Iran, Pakistan, Tajikistan, Turkmenistan, and Uzbekistan.

Irish Aid notes that the €1 million announced today for UNHCR is on top of €1m already provided to support humanitarian relief in Afghanistan in 2021. This previous €1 million was allocated to the UN Afghanistan Humanitarian Fund (€500k), Concern (€349k), and Halo Trust (€189k).

On Monday, Minister Coveney confirmed that Ireland would issue up to 150 additional humanitarian visas for Afghans under the Irish Refugee Protection Programme (IRPP). The 150 visas come in addition to the 45 visas already approved in recent days for Afghans in similar circumstances.

Earlier on Monday, Coveney said: "I suspect in the next few days and weeks we may have to do a lot more than that because those numbers seem very, very small given the scale of the humanitarian catastrophe that may start to unfold in the next few days."