President Joe Biden says he stands "squarely behind" his decisions in Afghanistan, while Ireland vows to issue 150 visas as part of its Refugee Protection Programme. 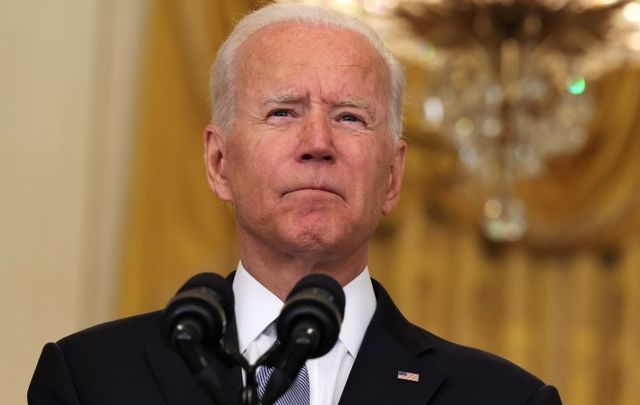 August 16, 2021: President Joe Biden gives remarks on the worsening crisis in Afghanistan from the East Room of the White House in Washington, DC. Getty Images

President Joe Biden laid out the next steps for the US in Afghanistan as Ireland prepares to offer up to 150 humanitarian visas to Afghans.

President Biden said in a live address from the White House on Monday: “We went to Afghanistan almost 20 years ago with clear goals: get those who attacked us on September 11, 2001, and, make sure Al Qaeda could not use Afghanistan as a base from which to attack us again. We did that.”

“Our mission in Afghanistan was never supposed to be nation-building,” Biden said, adding that “our only vital national interest in Afghanistan remains today what it has always been: preventing a terrorist attack on American homeland."

He continued: "When I came into office, I inherited a deal that President Trump negotiated with the Taliban.

"Under his agreement, U.S. forces would be out of Afghanistan by May 1, 2021, just a little over three months after I took office. US forces had already drawn down during the Trump administration from roughly 15,500 American forces to 2,500 troops in country. And the Taliban was at its strongest militarily since 2001.

"The choice I had to make as your president was either to follow through on that agreement or be prepared to go back to fighting the Taliban in the middle of the spring fighting season.

"I stand squarely behind my decision. After 20 years, I’ve learned the hard way that there was never a good time to withdraw US forces. That’s why we’re still there. We were clear-eyed about the risks. We planned for every contingency.

“But, I always promised the American people that I’ll be straight with you. The truth is, this did unfold more quickly than we had anticipated.

"So what’s happened? Afghanistan political leaders gave up and fled the country. The Afghan military collapsed, sometimes without trying to fight.

"If anything, the developments of the past week reinforced that ending US military involvement in Afghanistan now was the right decision.

“American troops cannot and should not be fighting in a war and dying in a war that Afghan forces are not willing to fight for themselves,” Biden said, adding: “We gave them every chance to determine their own future. We could not provide them with the will to fight for that future.”

Biden’s comments on Monday come as harrowing photos and videos emerge from Kabul Airport, where Afghans are desperate to board flights out of the country. At least seven people died amidst the chaos as of Monday evening.

Roughly the same time as Biden’s address on Monday, Ireland’s Department of Foreign Affairs, Department of Children, Equality, Disability, Integration, and Youth, as well as the Department of Justice, issued a statement that confirmed the provision of up to 150 additional humanitarian visas for Afghans under the Irish Refugee Protection Programme (IRPP).

The Irish statement notes that during Monday's emergency meeting of the United Nations Security Council, Ireland "strongly condemned the appalling attacks perpetrated against civilians, and called for an immediate end to violence and intimidation."

Indeed, Geraldine Byrne Nason, Ireland's Ambassador to the UN, said during Monday's special meeting: “All of us around the table can and should agree that as a non-negotiable principle in all discussions, the rights of women in Afghanistan must be protected. This is the future of Afghanistan.”

She added: “We will not turn a blind eye to the truth. We condemn, in the strongest terms, the deliberate targeting of women and girls by the Taliban.”

After the meeting, the UN Security Council called for "an immediate cessation of all hostilities and the establishment, through inclusive negotiations, of a new government that is united, inclusive and representative – including with the full, equal and meaningful participation of women."

Monday's statement from the three Irish departments said: “Ireland has been a strong advocate for the rights of women and girls in Afghanistan and has highlighted the importance of upholding the fundamental human rights of all people living in Afghanistan.

“Ireland will play its part in providing practical support to some of those under threat from the Taliban by providing for their resettlement in Ireland. Priority will be given to those working on human rights issues, including the rights of women and girls, as well as those working with NGOs and European and international organisations.

“The allocation of up to 150 refugee resettlement places under the Irish Refugee Protection Programme is in addition to 45 visas already approved in recent days for Afghans in similar circumstances.

“The Department of Justice is also prioritising the processing of family reunification and visa applications for Afghan nationals on hand, which is expected to result in a further approximately 150 people being granted permission to enter Ireland.”

The statement said that Simon Coveney, Ireland’s Minister for Foreign Affairs, will take part in an emergency meeting of EU Foreign Ministers on Tuesday to discuss the EU response to the crises in Afghanistan.

TD James Browne also said on Monday that there is “no question” of anyone being returned to Afghanistan from Ireland given the current situation:

In line with Covid commitments, no deportation orders are currently being enforced. While there are a number of deportation orders in place for Afghan nationals there is no question of anyone being returned to Afghanistan given the current situation. @DeptJusticeIRL