Irish woman Aoife MacManus, who works in the educational sector in Kabul, has spoken out about her "hectic" few days attempting to leave Afghanistan. 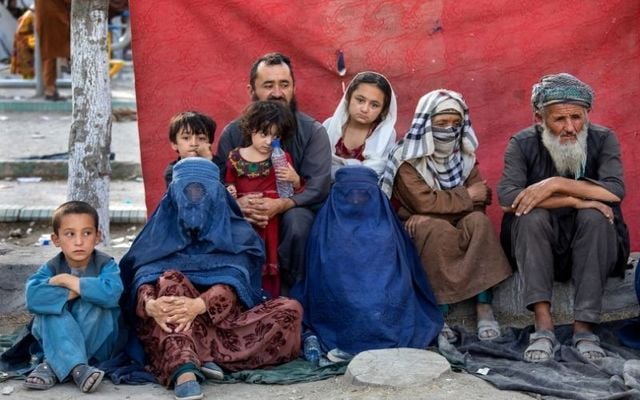 August 12, 2021: Charyar,70, from the Balkh province, sits alongside his family at a makeshift IDP camp in Share-e-Naw park to various mosques and schools in Kabul, Afghanistan. People displaced by the Taliban advancing are flooding into the Kabul capital to escape the Taliban takeover of their provinces. Getty Images

An Irish woman working in Kabul has described the uncertainty and fear felt in the city since the arrival of the Taliban.

“There is a sense of panic and fear all over the city,” Aoife MacManus, a native of Ashbourne in Co Meath, told the PA news agency.

However, she told RTE's Morning Ireland on Monday that she is "as safe as I can be."

MacManus, who works in the primary education sector, has been in Kabul in Afghanistan for about two years. On Sunday, the Taliban retook Afghanistan's capital of Kabul, nearly two decades after they were driven from the city by US troops.

"I'm in quite a safe place, I hope," MacManus told Morning Ireland.

"I think where I am right now is relatively calm. I've had a very hectic maybe 36 hours before this where I've moved around several times around the city depending on the safety or the deterioration of the security situation.

"It's been quite hectic, I'm very happy to sit in one place for the last few hours since last night."

She continued: "So far as one can be safe, I reckon yeah, I'm safe right this minute.

"I've been in some hairy situations within the last 24 hours, but feeling safe enough right now."

MacManus declined to comment further on her "hairy situations" until she's returned home to Ireland. She said the situation has deteriorated very rapidly, forcing her plans to leave Afghanistan to change frequently and often at the last minute.

"There was panic but there wasn't angry panic," MacManus said of her and her convoy's arrival near Kabul Airport. Photos and videos have emerged of desperate Afghans clinging to the sides of planes at the airport hoping to escape the fallen city.

"In fact, instead of there being a chaos there, there was a calm where people actually physically lifted a car that had been abandoned from in front of us so that we could get to where we were going in safety.

"But then within the next 12 hours, that crowd wasn't so calm anymore, and things changed again.

"When we left there last night to come to where we are right now, the city had changed. All of the checkpoints were Taliban, the police cars were full of Taliban."

MacManus said she is with friends and people who "really know what they're doing, which is great. The best of a bad situation."

MacManus said she has contact with the Irish embassy in Abu Dhabi as there is no Irish representation on the ground in Afghanistan.

Aoife MacManus tells @Mary___Wilson "I'm as safe as I can be...we would've been able to leave earlier if it hadn't been for the situation in the airport so as soon as it's cleared...I have every faith that I'll be on a plane & having a pint of Guinness in Ashbourne in a few days."

On Monday, Simon Coveney, Ireland's Minister for Foreign Affairs, said: "We've already made decisions in relation to providing visa waivers for Afghans who have been trying to get out of Afghanistan for the last few days.

"We've already approved 45 visa waivers. Some of those people are trying to get out and some are in Pakistan having fled across the border and will be flying to Ireland.

"I've agreed with Minister O'Gorman that we would certainly make available between 100 and 150 more places in terms of refugees and we'll be prioritizing human rights organizations, media, women and girls, obviously, and other family members that are vulnerable.

Later on Monday, Ireland’s Department of Foreign Affairs, Department of Children, Equality, Disability, Integration, and Youth, as well as the Department of Justice, issued a statement that confirmed the provision of up to 150 additional humanitarian visas for Afghans under the Irish Refugee Protection Programme (IRPP).