The bank robbery that saved the Irish peace process

Without the Northern Bank robbery in December 2004, it is difficult to imagine how the peace process in Northern Ireland could have reached its next great milestone. 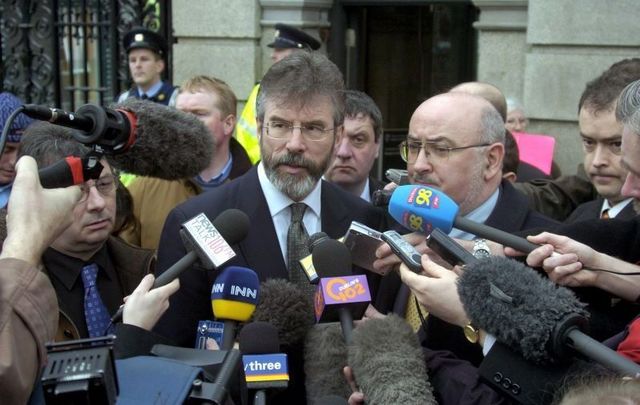 Feb 10, 2005: Sinn Fein President Gerry Adams (L) and TD Caoimhghin O Caolain, speaking to the media outside Leinster House, Dublin in response to the report from the Independent Monitoring Commission, and its main conclusion that the IRA was responsible for the Northern Bank raid. RollingNews.ie

On a late December day in 2004, groups of armed men, clad in balaclavas, arrived at the homes of two Northern Bank employees; one in a quiet country town in County Down, the other in a congested corner of West Belfast. They took their families hostage—bounding them and threatening their lives—and ordered the employees to return to the bank the next day with instructions to withdraw huge sums of cash from its vaults and to await further direction. They complied.

After the bank closed the following afternoon, another contingent of gunmen arrived and transferred the stolen money into a number of cars parked outside. Once the cash was delivered, the robbers fled with barely a trace, leaving the families unharmed, but now in possession of approximately £26.5 million. It was the largest bank robbery in British and Irish history.

Suspicion immediately fell on the Provisional IRA. No other group had the organizational capacity to carry out a crime with that level of sophistication. The Independent International Commission on Decommissioning (IICD) issued a special report concluding “firmly that [the robbery] was planned and undertaken by the PIRA.” Leaders across Britain and Ireland denounced the IRA and its political wing, Sinn Féin, expressing utter shock at what they saw as a blatant attempt to derail a still-fragile peace process. That the IRA would commit such a brazen, provocative crime when Sinn Féin was on the cusp of power raised disheartening questions about the seriousness of the republican peace strategy.

On the surface, the IRA’s motivation was obvious: It wanted to boost funding, ostensibly to support new recruits and purchase more weapons, and there was little reason to think otherwise. The IRA had been on ceasefire since 1997, but it was dragging its feet over decommissioning its existing stockpiles of weapons, and authorities confirmed the previous April that “it continued to recruit … and to gather intelligence.” Indeed, the Northern Bank robbery was only the latest (but by far the largest) in a string of robberies that year linked to the IRA.

In a peculiar twist, the IRA leadership refused to take responsibility. Martin McGuinness denied claims the IRA was responsible, calling the charges “a renewed attempt to undermine the peace process.” Public relations had always formed a vital part of the armed campaign, and its success was dependent on the IRA’s ability to portray itself as a powerful, resilient force. Committing the largest bank robbery in British history should have been the ideal opportunity to reinforce that image, but the leadership’s refusal to do so suggests that, rather than sending a message to unionist politicians, militant loyalists, or even the British government, the robbery served purposes internal to the republican movement itself.

Some contemporaries accepted this view, and officials at the time suggested that the robbery had been authorized by the republican leadership to fund a pension scheme for IRA volunteers. Of course, the purpose of a military pension program is to support soldiers after a given conflict has ended, so it necessarily follows from this interpretation that the IRA must have been in the planning stages of completely ending its campaign as early as December 2004 (and probably even earlier, to account for preparation time).

But these developments were not occurring in a vacuum. There was still a substantial degree of overlap in Sinn Féin and the IRA’s leadership structures, meaning Sinn Féin leaders would have had a decisive say in the final decision to authorize the heist. To properly assess the movement’s deeper motivations, then, we must measure it against the contemporary political context to fully understand where it fit inside the broader republican agenda.

Northern Ireland’s devolved assembly collapsed in October 2002 after accusations that the IRA was operating a spy ring inside Stormont. In the assembly elections that followed in November 2003, Sinn Féin and the DUP—representing the hardline, uncompromising strands of their traditions—clawed themselves to the top of their respective communities. They characteristically refused to go into government together, creating a severe political crisis that threatened to bring the peace process down.

Several unresolved issues were brought to the fore, but the most contentious one—the one that struck at the heart of the impasse—was security. The DUP refused to share executive posts with Sinn Féin as long as the IRA still held onto its weapons, and Sinn Féin would not even recognize the legitimacy of the new state institutions while British security forces remained on active service. The result was a collapsed executive, intense political paralysis, and the longest period of direct rule from London since the Troubles.

That situation endured for about a year when, under circumstances we can only speculate, Sinn Féin chose to make the first move. Safe from the critical watch of the public eye, Sinn Féin members sitting on the IRA Army Council—in the full knowledge that any movement on the British side required an end to the armed campaign—authorized the Northern Bank robbery, giving the IRA the financial support it needed to buy out the remaining volunteers and end its campaign for good.

Seven months after the heist, on July 28, 2005, the IRA announced that it had “formally ordered an end to the armed campaign,” and agreed “to engage with the IICD to complete the process to verifiably put its arms beyond use.”

British Prime Minister Tony Blair called the announcement a “step of unparalleled magnitude,” and a joint Anglo-Irish governmental statement called it “a momentous and historic development.”

Days later, Northern Ireland Secretary Peter Hain issued a statement outlining a two-year process to draw down the British troop presence and disassemble its military architecture in the country. Then, in September, the IICD submitted a report expressing its satisfaction that the IRA had fully decommissioned its weaponry.

The dramatic transformation of the security situation in the second half of 2005 led to a completely changed political situation in 2006, creating the space for the DUP and Sinn Féin to reopen negotiations. Events gathered speed soon thereafter. The details of the more minor issues were hammered out as the year progressed, and after a little trickery on the part of the British government, the parties eventually arrived in the middle and signed the St. Andrew’s Agreement in November, setting the framework that allowed them to govern together.

The signing of the agreement was hailed as a momentous departure. Secretary Hain called it an “astonishing breakthrough,” and Irish Taoiseach Bertie Ahern said, “it will bring the peace process to a successful conclusion.” It heralded arguably the most conciliatory period in Northern Irish political history, embodied by the surprisingly close friendship between the erstwhile loyalist firebrand Ian Paisley and former IRA commander Martin McGuinness, earning them the endearing sobriquet ‘Chuckle Brothers.’

All of this stemmed from the IRA’s unilateral decision to end the armed campaign, but without the massive financial incentive provided by the Northern Bank robbery, such a move was impossible. The IRA’s very reason for existing had always been to defend nationalist communities against militant loyalists and rampaging British soldiers, but on the eve of its announcement, not only did loyalists still hold the great bulk of their weapons, British soldiers were still on active duty. Other than the verbal assurances it received, there was no good reason for the IRA to believe its move would be reciprocated.

The pressure, then, could have only come internally—either due to the masterful persuasiveness of the movement’s politicos (highly doubtful, considering Gerry Adams had by then lost the faith of the militarists), or by some other, more inducing means. In view that the Northern Bank robbery served no meaningful propaganda purpose, it seems most likely that the provision of a lucrative pension fund (supplied by the bank robbery) was offered by Sinn Féin in exchange for an end to the campaign and full decommissioning. The IRA recognized the jig was up and took the offer.

Of course, it is misleading to boil down a moment with the historic magnitude of the ending of the IRA’s armed campaign to a single event. The process Sinn Féin / IRA underwent to transition from armed struggle to electoral politics was an especially long, arduous, and divisive journey that is still highly controversial among republicans. There were numerous other single events, decisions, maneuvers, victories, and defeats over the preceding decades that pushed the IRA beyond the point of no return. But similar to those moments, the Northern Bank robbery was an important piece in the jigsaw. Without it—and especially without the funds it provided—it is difficult to imagine how the security situation could have improved when it did, and thus how the peace process could have reached its next great milestone.