During his funeral on August 5, John Hume was remembered as having "made peace visible for others." 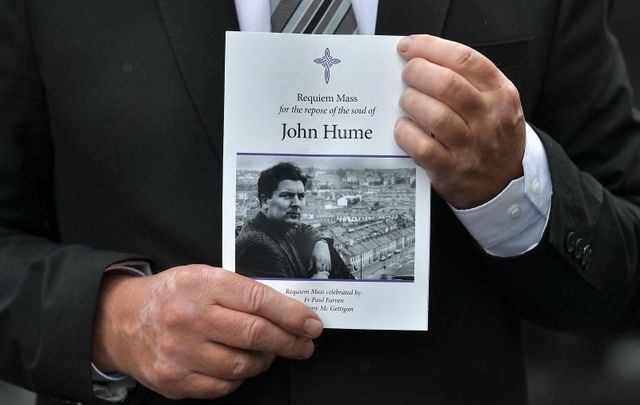 August 5, 2020: A mourner holds an order of service as the funeral takes place for John Hume at St Eugene's Cathedral in Derry. Getty Images

John Hume was remembered with kindness and respect during a scaled-back funeral held in his native Derry today, August 5.

John Hume’s funeral was held at Saint Eugene’s Cathedral on Wednesday morning. The civil rights activist, politician, and Nobel Peace Prize laureate passed away on August 3 at the age of 83.

Due to coronavirus restrictions, just over 100 people were able to be in attendance at the service that would have, in normal times, been at capacity. Hume’s wife Pat, his children and grandchildren were joined by Northern Ireland First Minister Arlene Foster, Northern Ireland Deputy First Minister Michelle O’Neill, President of Ireland Michael D. Higgins, and Taoiseach Micheál Martin for the service. 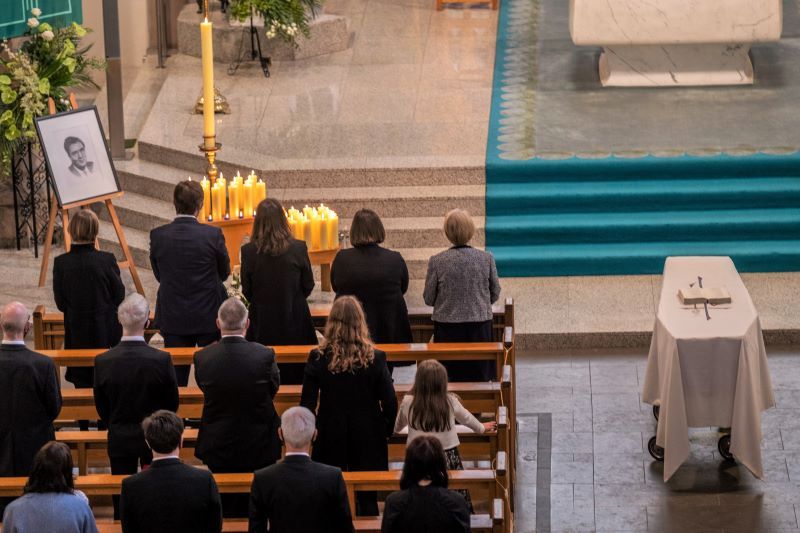 Hume's son Aidan, however, was not able to make the journey from the US to Derry to attend his father's funeral service due to the current coronavirus restrictions. Instead, he penned a poem that was read to the congregation by his sister Mo:

To dad: Your friend Seamus Heaney wrote of a time when justice will rise up, open history will rise, using a moral compass as your only tether.

It was your perseverance and sheer force of will, that brought them together.

It began with a corrupt sighting at the university, driven by a total lack of respect for diversity.

Onto Stormont, Strasburg, Westminster, even Washington DC, you showed us just how impactful one man can be.

You made us realize a border is just a line on a map.

It’s in our hearts and minds, where we need to bridge the gap.

Over 30 years of violence, hurt, and unrelenting stress, those underlying conditions you never stopped trying to address.

Difference is but the accident of birth, and everyone has the right to the same self-worth.

Patriotism is the spilling of sweat, not blood, the glory of the gun is a myth that is truly a dud.

You did not do it all alone but made damn sure the seeds were sown.

Leadership is the art of convincing others you’re right, not being prisoner to a base or projecting might.

Like any father-son, our relationship was occasionally frayed, but we were all grateful that on the course you stayed and showed us that even a wee boy from the Glen could dismantle the power of the sword with a simple pen.

I don’t ever think I said aloud, how you’ve made us all so incredibly proud

All you ever wanted was to make the world a better place, and in that goal, you found your ace.

Ahead of the liturgy, the Bishop of Derry, Dr. Donal McKeown, shared messages that were sent in from Pope Francis, the Dalai Lama, former US President Bill Clinton, UK Prime Minister Boris Johnson, and U2 frontman Bono.

John Hume, Jr welcomed the mourners to the Cathedral in an address that featured personal, heartwarming memories of his beloved father. 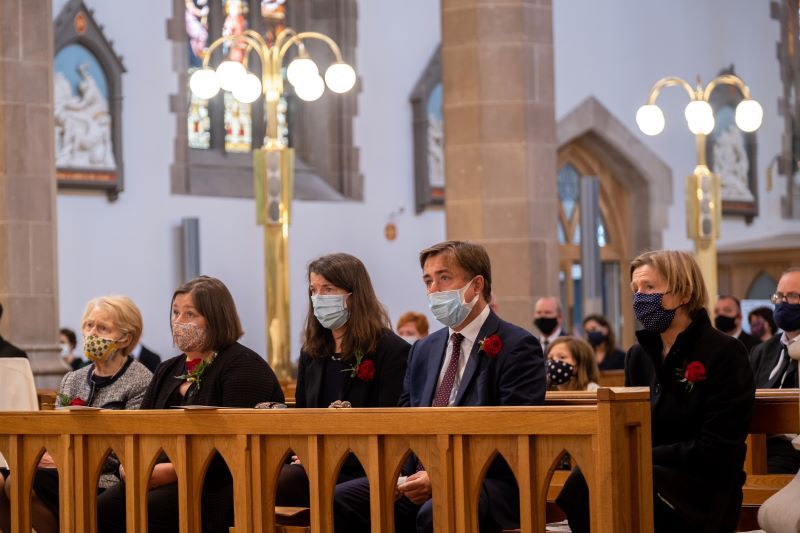 During his homily, Father Paul Farren said in part: "In a time in our world when often small-mindedness and self-focus seems to be the driver, John never put anybody or any specific group first. He put everybody first. He didn’t focus on difference and division. He focused on unity and peace and giving that dignity to every person. We should never underestimate how difficult it was for John to cross the road and do what was intensely unpopular for the greater good.

"Even in the darkest moments, when people would have been forgiven for having no hope, John made peace visible for others. His vision revealed what could be and with time, and determination, and single-mindedness, and, yes, with absolute stubbornness, he convinced others that peace could be a reality.

"If ever you want to know a man who gave his life for his country, and his health, that man is John Hume. The world knows it. He is the only person in the world to have received the Noble Peace Prize, The Gandhi Peace Prize, and the Martin Luther King Peace Prize. Pope Benedict XVI made him a Knight Commander of the Papal Order of Saint Gregory the Great."

He added: "John and Pat have secured their place in the history of Ireland, John being Ireland’s Greatest. Today we pray that John has secured his place not in Ireland, not in Europe but in paradise."

At the close of the funeral mass, Irish singer Phil Coulter performed "The Town I Loved So Well," a favorite of Hume's which he often sang with his longtime friend Coulter:

You can watch back on John Hume's funeral at Saint Eugene's Cathedral in Derry here, courtesy of RTE: