Taoiseach Micheál Martin, who is set to visit Northern Ireland on Thursday, says he supports a "different approach" to the issue of Irish unity. 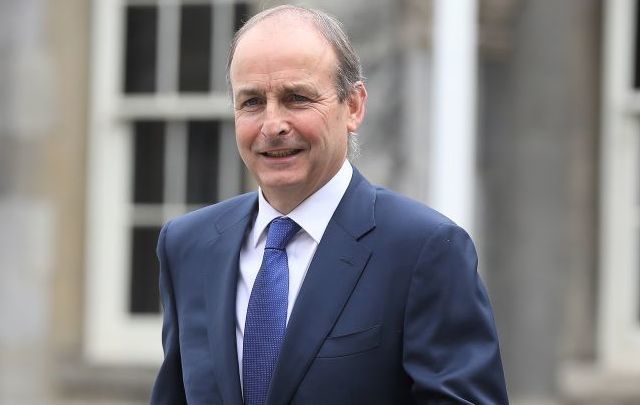 Ireland’s new Taoiseach Micheál Martin said in the Dáil this week that Sinn Féin is “over-focused” on hosting a border poll on Irish unity, calling their attitude towards it “divisive.”

On Tuesday during a meeting of the Dáil, Mary Lou McDonald, the President of Sinn Féin, said: “A united Ireland is the best idea for the future of our country.

“It is essential to the prosperity of all our people because growing our economy requires an all-Ireland approach.

Irish unity has long been one of the main tenets of Sinn Féin’s platform. The party enjoyed historic success during Ireland’s General Election which was held in February.

The new Programme for Government, which has seen Fine Gael, Fianna Fail, and The Green Party go into coalition, includes a section on “A Shared Island.”

“We are committed to working with all communities and traditions on the island to build consensus around a shared future," the PfG reads. "This consensus will be underpinned by the Good Friday Agreement and by the absolute respect for the principle of consent."

As part of that mission, the PfG calls for the establishment of a “unit within the Department of An Taoiseach to work towards a consensus on a shared island. This unit will examine the political, social, economic and cultural considerations underpinning a future in which all traditions are mutually respected.”

In response to McDonald’s comments in the Dáil on Tuesday, the Taoiseach said: “I don’t believe precipitating or organizing a referendum like that is the way to go.

“That was the Sinn Féin position since Brexit happened and you have come back a bit from it.”

“I think the over-focus on the border poll was too divisive, too partisan, and would only run counter to what you wanted to achieve.

He added: “The agenda for the future of this island is how we engineer and develop an accommodation where we can all live in peace and harmony on the island and to not try to dictate to one tradition about what the solution is going to be which seems to be the agenda you’re pursuing.

“The Good Friday Agreement is the defining document because it is based on three sets of relationships, the British-Irish relationship, the North-South relationship, and the two traditions within Northern Ireland itself.”

Martin said the focus of the all-island unit is to see how the Government can “develop a shared future.”

“Irrespective of what may emerge in the future, it is my view that these three sets of relationships will have to underpin any future arrangements.”

Martin later told The Irish Times that he would take a “pragmatic” approach and seek to promote “practical” co-operation between North and South, and would not be pushing the British government for a Border poll.

He said there were “two different philosophies and two approaches at work – one is just have a Border poll and get a majority, but mine is much more rooted in the Good Friday Agreement ... a consensus approach.”

In December of last year, before Ireland’s next general election was called for, Martin told reporters in Leinster House: "I don't see it [a border poll] happening in the lifetime of the next government but I might be wrong."

“What's been going on for the last three years is wrong, fundamentally, and will put back unity," he said.

"My view is the poll itself should be the culmination of a developed understanding and I think, I believe in an evolutionary pathway to this as opposed to the sort of a sudden 'let's do this now anyway'," he added.

In response to the Taoiseach’s comments this week, Sinn Féin Chief Whip and TD for Donegal Pádraig Mac Lochlainn said in a statement: "Demand for Irish unity has been growing steadily over the last number of years and Sinn Féin have been pressing the Irish government to begin meaningful engagement with the British government to arrange a date for a referendum on Irish unity within the next five years.

"To plan for a United Ireland, we need an All-Ireland Forum or a Citizens Assembly to plan for constitutional change and to ensure that the path to reunification is inclusive and orderly, because it is reckless to refuse to plan for the future.

"By refusing to plan for unity, the Taoiseach is abdicating his responsibility as head of government. Those that press this view are acting foolishly and are not protecting or respecting any section of our people - unionist, nationalist or otherwise

"Whilst Fianna Fáil occasionally pays lip service to its Republican roots, it has long since abandoned any desire to advocate for a United Ireland; particularly under Micheál Martin’s leadership.

"A referendum on Irish unity is expressly provided for in the Good Friday Agreement - despite what the Taoiseach thinks. This is an agreement that was endorsed by the people of this island, north and south, overwhelmingly over twenty years ago.

"Respecting that agreement must be the responsibility of the Irish government. Contradictory remarks about what the agreement says are deeply unhelpful, and quite frankly ridiculous.”

Martin is set to visit Northern Ireland on Thursday to meet with First Minister Arlene Foster of the DUP and Deputy First Minister Michelle O’Neill of Sinn Féin.