NYPD Steven McDonald was shot and paralyzed in the line of duty on July 12, 1986, in Central Park. He spent the rest of his life spreading the message of forgiveness. 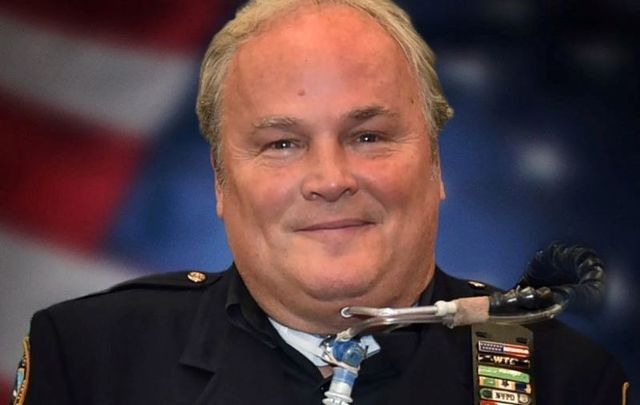 NYPD officer Steven McDonald was shot and paralyzed by a teenager in Central Park on this day, July 12, in 1986.

To mark the day, a ceremony was held in Central Park for the Irish American hero cop who died in 2017.

Today marks 35 years since Detective Steven McDonald was shot while protecting the city of New York. We never forget the example he has left us with and the love he showed everyone.

We miss you Steve. pic.twitter.com/QsziQ3sx5q

Detective Steven McDonald Memorial Mass @NYPDCentralPark. 35 years ago today, Detective McDonald was shot & paralyzed while protecting the city of New York. Until his death in 2017, he made it his mission to spread a message of compassion & forgiveness. #NeverForget pic.twitter.com/OHA6mQZ99H

Today, leaders within the NYPD paid homage to the inspirational Irish American :

35 years ago today,@NYPDCentralPark Det. Steven McDonald was shot & paralyzed by a 15-year-old with a gun. Steven went on to spread a message of forgiveness, compassion, & love until his death in 2017.

Steven, & his message, will always live on in the hearts of our NYPD family. pic.twitter.com/SsYpXomEfx

35 years ago, Detective Steven McDonald of @NYPDCentralPark was shot in the line of duty, leaving him paralyzed. Until his death in 2017, Det. McDonald made it is mission to spread the ideas of compassion and forgiveness around the world. pic.twitter.com/l9PKyXu8bv

A senseless act of violence 35 years ago confined Det. Steven McDonald to a wheelchair, but nothing could stop him from transforming that fateful day into one of the most beautiful, inspiring stories of love and forgiveness heard around the world. We will #NeverForget Steven. pic.twitter.com/jSp4aPahSC

After being shot in Central Park 35 years ago, Det. Steven McDonald forgave the shooter that paralyzed him. He has since passed on but not before inspiring the millions with his message of compassion, forgiveness & perseverance. We vow to #NEVERFORGET our hometown hero. pic.twitter.com/M7AnOwp1Ry

On July 12, 1986, McDonald had been responding to a report of a robbery with his partner in Central Park on that fateful evening. He was shot three times by 15-year-old Shavod Jones, whom he was questioning about local bicycle thefts.

The first bullet hit McDonald in the head, above his eye; the second hit his throat and caused him to have a speaking disability; and the third shattered his spine, paralyzing him from the neck down and leaving him quadriplegic and in need of a ventilator.

McDonald later said he forgave Jones, who was sentenced to nine years in prison for his crime. Jones said he called McDonald to apologize, but the two never met in person after their first tragic meeting. Jones was killed in a motorcycle accident on September 10, 1995, while he was out on parole.

Between 1998 and 2000, McDonald traveled alongside fellow inspirational Irish American Rev. Mychal Judge to Northern Ireland several times to promote nonviolent conflict resolution through forgiveness. During that period, he became involved with the Breaking the Cycle program which promotes the same message through youth assemblies.

In 2014, McDonald and his family were inducted into the Irish America Hall of Fame.

McDonald died in January 2017 after suffering a heart attack. The Irish American was 59 years old and his funeral, presided over by Cardinal Dolan, was held at St. Patrick's Cathedral in New York City. Up until his death, McDonald continued to preach his message of forgiveness.