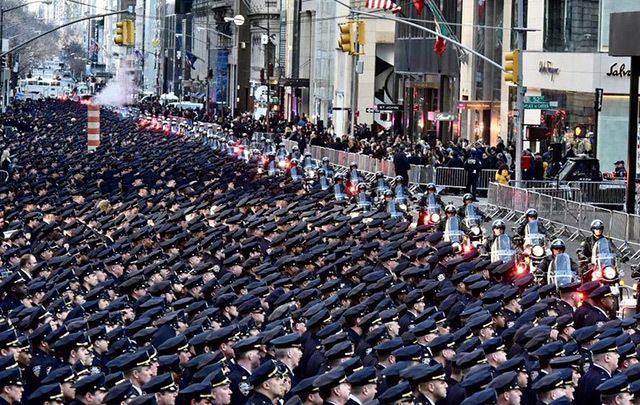 The funeral took place this morning of Detective Steven McDonald, 59, an NYPD cop renowned for forgiving the 15-year-old who shot him over 30 years ago, inflicting a spinal injury that left him paralyzed from the waist down.

Escorted by police motorbikes and to the sound of “Amazing Grace” on bagpipes, McDonald’s casket was carried, draped in an NYPD flag, into St. Patrick’s Cathedral on Fifth Avenue where thousands had gathered to pay their respects.

In attendance were Mayor Bill de Blasio, Police Commissioner James O'Neill, former mayor Rudy Giuliani and former police commissioners Bill Bratton and Ray Kelly,  who joined thousands of police officers to bid farewell to McDonald. He died on Tuesday at North Shore University Hospital on Long Island after being admitted to the hospital the previous Friday following a heart attack.

Third-generation cop McDonald was tragically shot by a 15-year-old in Central Park in 1986, suffering a severe high spinal injury that left him paralyzed for 30 years. His funeral today took place just 50 blocks south of the spot that would change his life forever.

Despite his wife Patti Ann being told he wouldn’t live through the day, McDonald fought through his injury and returned to his work as a police officer as an advocate of peace and reconciliation, best shown by his public forgiveness of the teenager who caused his injury.

“We’re here to thank God. To thank God for Steven’s splendid life of love and service and finally, we’re here to ask the Lord to console his loyal, loving family, so many friends, fellow police officers and a community that misses him a lot already,” Dolan said.

“I think the most important thing we can take away from my father is his mission of love and compassion and forgiveness,” his son Conor said.

Although paraplegic and dependent on oxygen and 24-hour care, McDonald became a goodwill ambassador for the NYPD, attending events, giving speeches and counseling troubled kids, always promoting a message of nonviolence and forgiveness.

He traveled to war-torn regions including the Middle East and Northern Ireland and was the first person in a wheelchair to march in the St. Patrick’s Day Parade, threatening a boycott in 1991 unless organizers let other people with disabilities also join the procession.

.@NYPDHighway motorcycles & our partners from near and far lead today's procession as we honor Detective Steven McDonald. #NeverForget. pic.twitter.com/co0BMwksty

"No one could have predicted that Steven would touch so many people, in New York and around the world," Police Commissioner James O'Neill said in a statement.

"Like so many cops, Steven joined the NYPD to make a difference in people's lives. And he accomplished that every day. He is a model for each of us as we go about our daily lives. He will be greatly missed, and will always remain a part of our family."

The hearse as it makes its way down Fifth Ave. Image: Facebook/Fox 5.

"Steven was an inspiring human being and a man of deep and abiding faith who, when confronted by adversity early in his police career, responded with courage, grace, and dignity," said Queens County District Attorney Richard Brown, calling McDonald "a true hero of the City of New York."

"I was proud to call him my friend."

Flags are to be lowered at half-mast in McDonald’s honor, as ordered by Mayor Bill de Blasio, while an NYPD Aviation Unit also conducted a flyover over Manhattan, Brooklyn, and Staten Island today between 11 a.m. -2 p.m to pay their respects.

McDonald is survived by his wife Patti Ann, his son Conor, his father, David McDonald, and several brothers and sisters.

“Not just this past week, but for over the past 30 years.”