The late NYPD Detective Steven McDonald’s family was in attendance last week at a ceremony in Central Park. 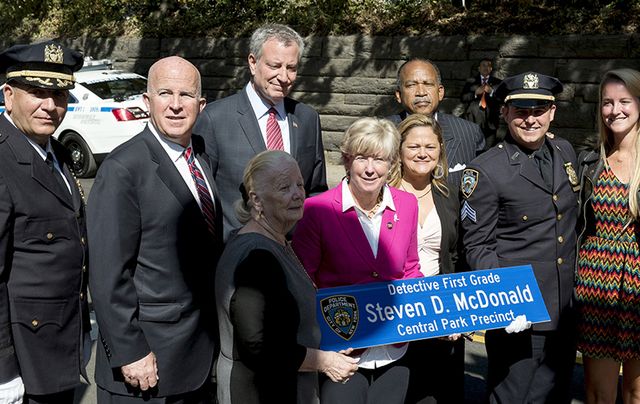 The late NYPD Detective Steven McDonald’s family was in attendance last week at a ceremony in Central Park where a street was renamed in his honor.

McDonald, 59, passed in January of this year after an heroic life. He was shot and paralyzed in Central Park in 1986 but remained a vital member of the NYPD, traveling the world to deliver messages of peace and forgiveness.

“He would love to watch the people of this city running, skating and biking around the park. The smiles being made while everyone relished in the safety and beauty of Central Park was Steven’s confirmation that his sacrifice was well worth it,” Patti Ann McDonald told guests.

“Steven truly believed in his calling—to protect and serve.  All he wanted to do was show people the love we had to share.”

Conor McDonald said he wished his father was still around to help heal the world.

“It’s a very tough time right now in this country, and I wish my father would stay alive for a very long time, so he could travel the world and people could hear his story, because if I could tell you how much pain he went through — no one would want to go through that,” he said.

Here's the news reports from the New York hero's funeral: