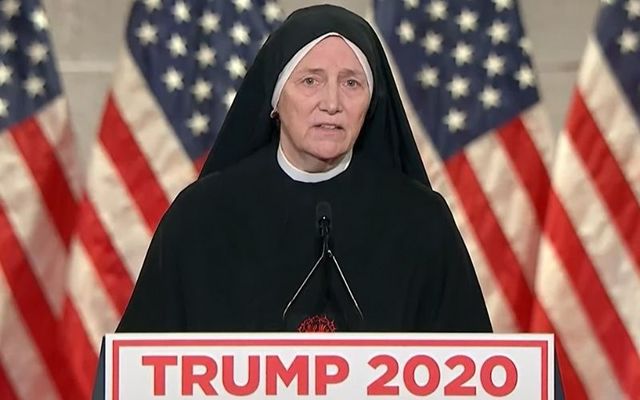 An Irish American nun is suing Washington DC in US federal court over its vaccine mandate for healthcare workers.

Sister Deirdre "Dede" Byrne, who is also a physician-surgeon and a retired US Army colonel, has been denied a religious exemption from DC's health worker Covid-19 vaccine mandate.

The Verified Complaint, filed on March 9, 2022 in the United States District Court for the District of Columbia by Thomas More Society attorneys on behalf of Sister Dierdre Byrne in Byrne v. Bowser, et al. is available to view online here.

“All three COVID-19 vaccines approved in the United States have been tested, developed, or produced with cell lines derived from abortions, something to which Sister Dierdre has deep and sincere religious opposition.”

He continued: “Judicial intervention is required once again, this time to prevent a senseless bar on the practice of medicine by a religious sister who has devoted her career in the District of Columbia to healing the sick who cannot afford quality medical care.”

Ferrara added: “The suit against Bowser and DC|Health (the district’s health department) is based upon the Religious Freedom Restoration Act of 1993 and the First Amendment to the United States Constitution, both of which protect Sister Dierdre’s fundamental right to the free exercise of her religion."

Infectious disease physician James Lawler said last year that Covid-19 vaccines did not contain aborted fetal cells. However, fetal cells lines - which are cells grown in a laboratory based on generations-old aborted fetal cells - were used in testing during research and development of the mRNA Covid vaccines. They were also used during the production of the Johnson & Johnson vaccine.

Sister Byrne is a member of the Roman Catholic religious order Little Workers of the Sacred Hearts of Jesus and Mary and provides free healthcare to the poor and undocumented.

She said she practiced medicine in hospitals and clinics around DC for almost six months while the DC's Department of Health considered her request for a religious exemption. She claims her request was denied through an unsent draft letter sent via email.

Sister Byrne added that the department rejected her request because it would cause "undue hardship" to DC|Health.

The lawsuit adds that Sister Byrne has contracted Covid-19 and remains naturally immune to the virus, as confirmed by T-cell testing. It also claims that DC|Health does not employ sister Byrne and cannot suffer any hardship by offering an exemption.

Sister Byrne spoke at the Republican National Convention two years ago and claimed that unborn babies were the most marginalized group in the world.

"President Trump will stand up again Biden-Harris, who are the most anti-life presidential ticket ever, even supporting the horrors of late-term abortions and infanticide," Sister Byrne said at the time.