WATCH: Irish American nun says at RNC that Trump is America's "most pro-life president" ever

Sister Deirdre Byrne claims Biden and Harris "are the most anti-life presidential ticket ever." 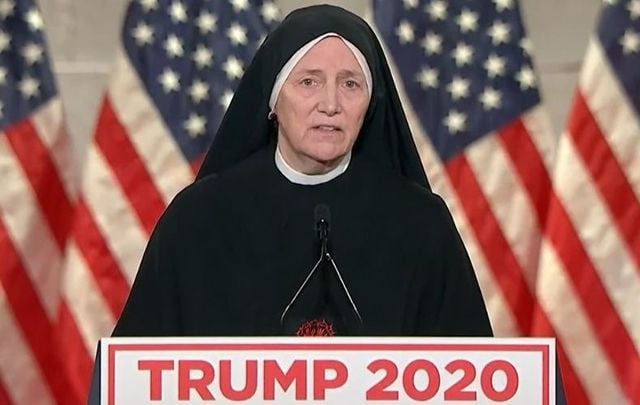 An Irish American nun took to the podium during the Republican National Convention to proclaim Donald Trump "he most pro-life president that this nation has ever had."

Sister Deirdre "Dede" Byrne, a member of the Little Workers of the Sacred Hearts of Jesus and Mary, addressed the Republic National Convention on August 26 and said that President Trump has "defended life at all stages."

Speaking on Wednesday night, Sister Byrne said: "And while we tend to think of the marginalized as living beyond our borders, the truth is, the largest marginalized group in the world can be found here in the United States - they are the unborn."

She continued: "Donald Trump is the most pro-life president that this nation has ever had, defending life at all stages. His belief in the sanctity of life transcends politics.

"President Trump will stand up again Biden-Harris, who are the most anti-life presidential ticket ever, even supporting the horrors of late-term abortions and infanticide."

The Catholic nun said that the President had won the support of the pro-life community in America through his "courage and conviction."

In 2012, speaking during the Vice Presidential debate against Paul Ryan, Joe Biden said: "My religion defines who I am. And I've been a practicing Catholic my whole life. And it has particularly informed my social doctrine. Catholic social doctrine talks about taking care of those who can't take care of themselves, people who need help.

"With regard to abortion, I accept my church's position that life begins at conception, that's the church's judgment, I accept it in my personal life.

"I do not believe that we have a right to tell other people that women can't control their body. It's a decision between them and their doctor, in my view. And the Supreme Court--I'm not going to interfere with that."

Earlier this year, a Biden campaign spokesperson told Mic: "Biden will repeal the Hyde Amendment and use executive action to on his first day in office withdraw the Mexico City 'global gag rule' and Donald Trump’s Title X restrictions. And, he will build on the Obama-Biden administration work to fund and protect Planned Parenthood from baseless attacks."

The spokesperson added: "As president, he will protect the progress we’ve made, codify Roe vs. Wade, and guarantee that access to quality affordable care — including reproductive health care — is a right, not a privilege for everyone no matter their race or zip code."

He has apparently reversed his pro-choice stance. Earlier this year, Trump became the first sitting president to attend the March for Life rally in Washington, DC.