President Biden likened Queen Elizabeth to his own late mother after his visit to Windsor Castle with his wife Dr. Jill Biden on June 13. 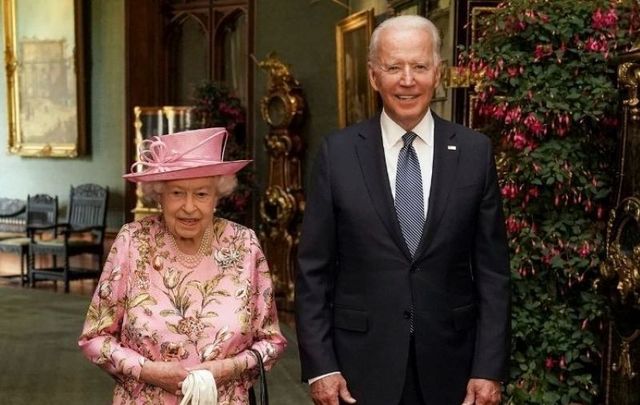 June 13, 2021: Queen Elizabeth II with US President Joe Biden in the Grand Corridor during their visit to Windsor Castle in Windsor, England. Getty Images

The President of the United States lavished praise on the British monarch saying she reminded him of his own beloved mother and praised her generosity.

In doing so, Biden is now the 13th US President that 95-year-old Queen Elizabeth had the pleasure of meeting.

The Bidens were hosted by Queen Elizabeth for afternoon tea towards the end of the President's first official trip abroad.

Honored to have met Her Majesty The Queen at Windsor Castle this afternoon. pic.twitter.com/6GnDMpmQ7w

Speaking afterward, Biden told the press that the Queen had reminded him of his own mother, Catherine Eugenia Finnegan who went by the name Jean, who passed away in 2010, aged 93.

"I don't think she’d be insulted but she reminded me of my mother, the look of her and just the generosity," Biden told the press before leaving London.

Of the Queen, Biden said: "She's extremely gracious, that's not surprising, but we had a great talk.

The US President was greeted with British pomp and fanfare in the Quadrangle of Windsor Castle. Joe Biden inspected a Guard of Honour formed of The Queen’s Company First Battalion Grenadier Guards, which gave a Royal Salute, and the US National Anthem was played before they entered the castle for tea.

The Guard of Honour is formed of the @BritishArmy’s most senior regiment of Foot Guards, The Grenadier Guards. pic.twitter.com/ObcxG1r3Md

He told the media the Queen had asked about life living in the White House.

Biden said: “I said, this is... we could fit the White House in the courtyard," referring to Windsor Castle.

Very honoured and privileged to have photographed Queen Elizabeth II with US President Joe Biden and First Lady Jill Biden in the Grand Corridor during their visit to Windsor Castle in Berkshire. Picture date: Sunday June 13, 2021. pic.twitter.com/2UsycYL1Ee

Biden was so taken with his visit he told the media "I said I wish we could stay longer, maybe we could hold the cars up a minute, and stuff. Anyway, she was very gracious."

He also confirmed that he had extended an invitation to Queen Elizabeth to visit with him at the White House, in Washington DC.

Biden had been visiting the United Kingdom where he attended the G7 Summit, in Cornwall.

*A version of this article was originally published on IrishCentral's sister publication British Heritage Travel.