Vice President Joe Biden has been remembering his mother, Catherine Eugenia Finnegan, known as Jean, who passed away on January 8. 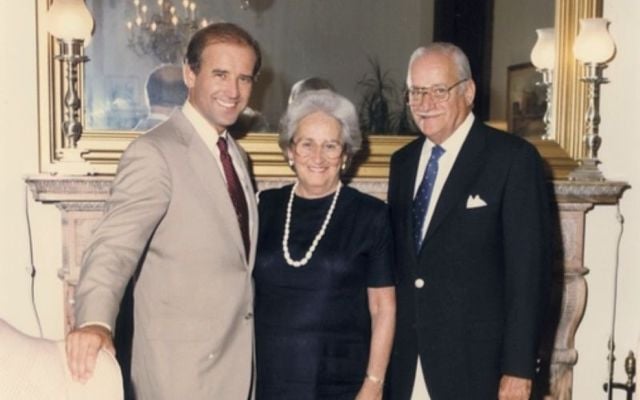 Joe Biden with his parents in the 1970s. Public Domain / Executive Office of the President of the United States

Vice President Joe Biden has been remembering his mother, Catherine Eugenia Finnegan, known as Jean, whose family came from Mayo, after she died yesterday aged 92.

"Together with my father, her husband of 61 years who passed away in 2002, we learned the dignity of hard work and that you are defined by your sense of honor," he said in the statement. "Her strength, which was immeasurable, will live on in all of us."

"Those of you who have met my mom, you know she's fairly politically astute, and she still runs the show," the vice president joked after she fell last year.

Catherine Finnegan was born July 7, 1917, in Scranton, Pa. Joe Biden grew up in a very Irish Catholic household where he remembered hearing from his mother's relatives about the Black and Tans. Biden later he became a huge admirer of Irish revolutionary Wolfe Tone who he once described as his political hero,

"My mother's creed is the American creed: No one is better than you," he said.

"Everyone is your equal, and everyone is equal to you. My parents taught us to live our faith, and to treasure our families. We learned the dignity of work, and we were told that anyone can make it if they just try hard enough."

"When I got knocked down by guys bigger than me, and this is the God's truth, she sent me back out the street and told me, 'Bloody their nose so you can walk down the street the next day.' And that's what I did."

Jean Biden helped her son when his first wife and daughter were killed in a car crash son after he was elected to the senate in 1972 and his two toddler sons were seriously injured.

"After the accident, she told me, 'Joey, God sends no cross that you cannot bear,'" Biden recalled.

His mother also defended him after a nun made a caustic comment about his stutter.

Biden recalled his mother went straight down to the school and told the nun, "If you ever speak to my son like that again, I'll come back and rip that bonnet off your head. Do you understand me?"