The Pope sought forgiveness for Catholic “crimes” in Ireland - will he do the same for Canada?

Justin Trudeau has called upon Pope Francis to offer an apology on Canadian soil after nearly 1,000 bodies were discovered in unmarked graves at Catholic-run institutions. 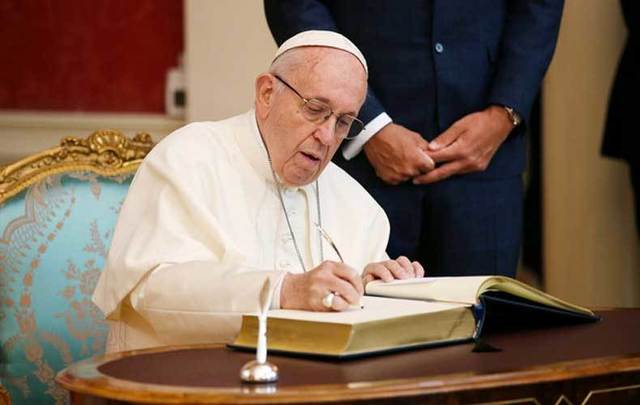 It was 2018 before Pope Francis sought forgiveness for the Catholic Church's "crimes" in Ireland - how long will it take him to do the same for Canada?

“I know that the Catholic church leadership is looking and very actively engaged in what next steps can be taken.”

Trudeau added: “I have heard directly from many Catholics across this country who want to see the church play a positive role in this.”

In late May, Tk’emlúps te Secwépemc Kukpi7 (Chief) Rosanne Casimir of Tk̓emlúps te Secwépemc (Kamloops Indian Band) confirmed that the remains of 215 students, some as young as three, from the Kamloops Indian Residential School had been discovered in unmarked graves.

The Oblates of Mary Immaculate, a Catholic missionary group, were charged with running the residential school in 1892 and maintained control of the facility until 1969 when it was taken over by the Canadian government. It shuttered in 1978 and saw its peak enrollment of 500 in the 1950s.

In the wake of the discovery at Kamloops, Pope Francis has failed to offer an apology, and has instead offered thoughts of "closeness."

On June 6, he said: “I join the Canadian Bishops and the whole Catholic Church in Canada in expressing my closeness to the Canadian people, who have been traumatised by shocking discovery of the remains of two hundred and fifteen children, pupils at the Kamloops Indian Residential School.

“These difficult times are a strong call for everyone to turn away from the colonial model and walk side by side in dialogue, mutual respect, and recognition of the rights and cultural values of all the daughters and sons of Canada.”

Later, on June 24, Cowessess First Nation Chief Cadmus Delorme confirmed that 751 unmarked graves had been found on the grounds of the Marieval Residential School, which operated from 1898 - 1996. The Catholic Church, Delorme said, oversaw the gravesite.

“This is not a mass grave site,” Delorme said during a press conference, “these are unmarked graves.”

He added that in 1960, “there may have been marks on these graves. The Catholic Church representatives removed these headstones and today they are unmarked graves.”

The shocking incidents in Canada, of course, bear a striking similarity to Ireland’s Mother and Baby Homes. Amateur historian Catherine Corless is credited with discovering the unrecorded mass grave of 796 babies and children at the Catholic-run Bon Secours Mother and Baby Home in Tuam, Co Galway.

In 2015, the Irish government commissioned an official investigation into the practices at Ireland’s Mother and Baby Homes, which ultimately examined 13 institutions across the country. The findings of the commission, which detailed widespread abuse, were published earlier this year.

During his papal visit to Ireland in 2018, Pope Francis said Katherine Zappone, then Ireland's Minister for Children, told him: "‘Holy Father, we found mass graves of children, buried children, we’re investigating… and the Church has something to do with this.’"

During the same visit, speaking at a Mass in Dublin's Phoenix Park with some 100,000 in attendance, Pope Francis asked for forgiveness for the Catholic Church's "crimes" in the country.

“To survivors of abuse of power, conscience and sexual abuse, recognizing what they have told me, I would like to put these crimes before the mercy of the Lord and ask forgiveness for them,” Pope Francis said.

“We apologize for some members of the hierarchy who did not take care of these painful situations and kept silent.”

Later in 2018, Minister Zappone wrote to the Pope, asking that “the church will accept its responsibilities and make reparation for its party in a very shameful chapter of Irish history."

The Pope responded, but did not reference the reparation request, instead saying: "I wish also to assure you of my prayerful solidarity and concern for this sad situation, and I pray in particular that efforts made by the Government and by the local Churches and religious congregations will help face responsibly this tragic chapter in Ireland’s history.”

Judging by his reaction in Ireland, it is unlikely that Pope Francis will offer any sort of formal apology to Canada or its Indigenous people too quickly.