While the Irish government has outlined its next steps, the Coalition of Mother and Baby Home Survivors slammed the final report as "fundamentally incomplete." 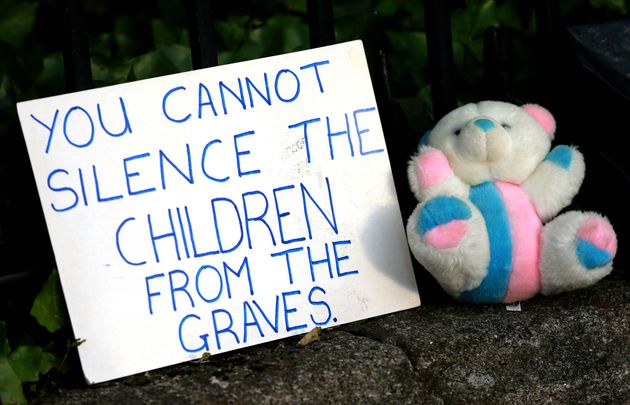 June 2014: A stark sign of protest from a gathering outside Ireland's government buildings demanding justice for the Mother and Baby Home survivors and those who died. RollingNews.ie

The Final Report of the Commission of Investigation into Mother and Baby Homes was published on January 12 after being submitted to the Irish government on October 30.

Speaking on Tuesday in response to the publication, Taoiseach Micheál Martin, who earlier in the day met virtually with survivors, said:

The survivors showed great bravery in sharing their stories.

The Government is now focused on a comprehensive implementation of the recommendations in this report. pic.twitter.com/zF904LrvIE

In a statement, the Irish government said on Tuesday: "In publishing the report, the government paid tribute to the former residents of these institutions; acknowledged their courage and thanked them for their testimony. Difficult though this report may be, it is hoped that its pages provide acknowledgement; recognition; truth, and, through this, healing."

The Irish government says it will now give “very careful and detailed consideration to the report” in the coming weeks in order to develop a “Government Action Plan” spanning eights areas:

The Coalition of Mother and Baby Home Survivors responds

“This report is fundamentally incomplete as it ignores the larger issue of the forced separation of single mothers and their babies since the foundation of the state as a matter of official state policy.

"While much of this policy was implemented in Mother and Baby homes, tens of thousands who were born outside the institutions investigated by this inquiry, have been excluded; particularly those who were illegally adopted. The numbers here are staggering as up to 15,000 people may have been illegally adopted by rogue adoption agencies who were allowed free reign back in the day and now have been given a free pass to escape their criminal behaviour.

“Every single day, illegally adopted people are giving medical professionals false, misleading, and potentially lethal family medical histories. This Government and Commission has essentially thrown them under a bus and walked away. Equally the County Homes operated directly by the Government have been largely ignored.

“It should be noted that the former Minister for Children stated that some 190,000 passed through the Homes.

"Some of the issues arising out of the Mother and Baby homes have not been dealt with in the Report. The Coalition has been campaigning on behalf of the Survivors of the Mother and Baby Homes for many years. The report, which is truly shocking, vindicates the position we have taken, states inter alia that there is 'strong evidence of physical and emotional abuse.' That women were made to scrub floors and stairs and treated as slave labour and were also treated appallingly while in childbirth by denial of Doctors, medical equipment, and painkilling drugs.

“It is clear from the Report that the Mothers and Children in the Homes suffered gross breaches of their Human Rights; in fact, what occurred was downright criminal.

“What happened in the Homes was not a 'massive societal failure' as Minister O’Gorman wants us to believe, nor is it explained by 'misogyny' as the Minister and an Taoiseach also wants to believe. That, with respect, is a 'cop-out.'

"What occurred was but an aspect of the newly established State which was profoundly anti-women both in its laws and in its culture and out of which emerged the Mother and Baby Homes. While it was wrong for families and others to send vulnerable unmarried pregnant girls to be incarcerated in Mother and Baby Homes, the Homes were handsomely paid by the taxpayers of Ireland and the nuns and Protestant women who administered them on behalf of the state were not entitled to deprive the young girls of their legal and Constitutional rights and the right to be treated with dignity and respect.

"We must not overlook the fact that the Government and the Roman Catholic Church and Protestant churches ran the Homes together hand in glove. What they did represents a damming indictment of Church and State. They jointly bear legal responsibility for the ill-treatment and abuse and the gross breach of Human Rights that occurred in the Homes, Catholic and Protestant alike.

“We now call on the Government to honour the commitments they have recently given to the Survivors including enhanced medical cards and the long-overdue funds for memorials for our crib mates who did not survive (promised by Minister O'Reilly in 2015)."

In the wake of the publication of the final report, it emerged late in the day on Tuesday that Wednesday's front page of The Irish Examiner newspaper would feature all the victims of the Bessborough Mother and Baby Home:

The Irish Examiner front page tomorrow is dedicated to all the children who died in Bessborough Mother and Baby Home. May they rest in peace. pic.twitter.com/W2wYRfl6dz

Taoiseach Micheál Martin said on Tuesday that he will deliver an apology in the Dail Eireann on Wednesday.