Micheál Martin will offer a formal state apology to mother and baby home survivors on Wednesday. 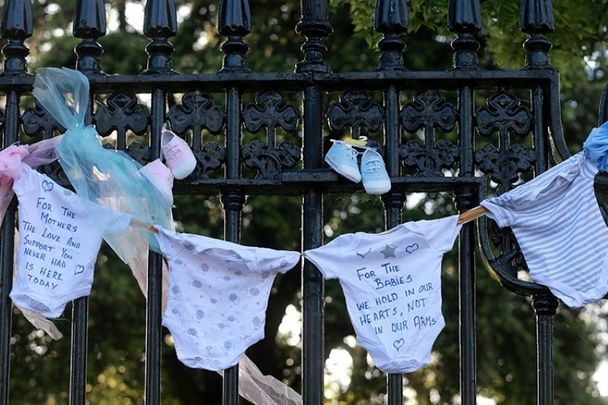 Kildare St, Dublin: A memorial at the Tuam Mother and Baby Home, where almost 800 children were buried in a mass grave. Rolling News

Taoiseach Micheál Martin will make a formal state apology to all mother and baby home survivors in the Dáil next week after an official report found that 9,000 babies died in 18 homes over a 76-year period.

A government spokesperson has confirmed that Martin will make the apology on Wednesday after the Mother and Baby Homes Commission of Investigation publishes its final report on Tuesday.

The Commission of Investigation's report will state that 9,000 babies died in 14 mother and baby homes and four state-operated county homes between 1922 and 1998 when the last mother and baby home in Ireland closed, according to the Irish Independent.

The Commission's estimates are based on evidence that infant mortality was twice as high in mother and baby homes than it was among the general population.

However, O'Gorman told RTÉ News that he is "deeply angered" that details of the Commission's report were leaked to a national newspaper, stating that survivors should have been the first people to hear the investigation's findings.

Taoiseach Micheál Martin is set to make the state apology on Wednesday when the Dáil reconvenes for the first time after its Christmas recess.

Martin said that he has read the report and found it both shocking and difficult to read, according to the Irish Independent.

He called the experiences of the mothers and babies who lived in the homes "extraordinarily sad and cruel."

Historian Catherine Corless, who helped uncover details about a mass grave at the Bon Secours Mother and Baby Home in Tuam, welcomed the forthcoming state apology but said that the apology must be backed up by action.

"All the words in the world won't matter unless there is action behind them," she told RTÉ.