Legal experts say that President Higgins had little choice when it came to signing the Mother and Baby Home bill into law. 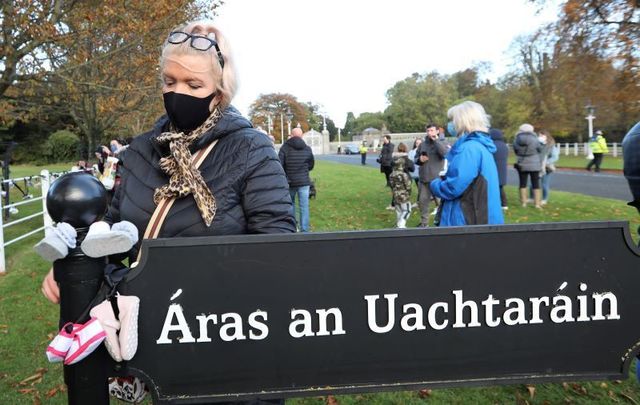 October 26, 2020: Protesters tie baby shoes to a gate during a Mother and Baby Home protest event at Aras an Uachtarain gate in Dublin. RollingNews.ie

President of Ireland Michael D. Higgins has signed the controversial Mother and Baby Home bill into law despite protests. In a statement, he reminded the citizens of Ireland that they are free to "challenge the provisions of the Bill."

The new legislation will seal records compiled by the Mother and Baby Homes Commission of Investigation that are not handed over to Tusla (Ireland’s Child and Family Agency) for 30 years.

The bill, which passed through the Dáil last Thursday night with a vote of 78 to 67, was supported by Fianna Fail, Fine Gael, and The Green Party, who currently form Ireland's three-pronged coalition government. Opposition parties Sinn Fein, Labour, Social Democrats, Solidarity - People Before Profit, and the independents voted against the bill.

A statement issued on behalf of President Higgins on October 25 said: “President Michael D. Higgins, having given careful consideration to all constitutional and other aspects of the ‘Commission of Investigation (Mother and Baby Homes and certain related Matters) Records, and another Matter, Bill 2020’, and having considered all the options available to him, today signed the Bill, one of four Bills submitted to the President late last week.

“The President has followed the passage of this Bill through both Houses of the Oireachtas, and has listened carefully to the debate and the issues raised as to the rights of access to information submitted to a Commission.

“While noting that important concerns were raised in the discussion on this Bill which are serious and must be addressed, the Bill itself did not directly raise a constitutional issue suitable for an Art 26.1.1 referral.

“When considering any piece of legislation, the President must also be cognisant of Art. 34.3 of Bunreacht na hEireann, which provides that no Court can question the validity of any legislation following a referral by the President to the Supreme Court. The President’s decision to sign this legislation leaves it open to any citizen to challenge the provisions of the Bill in the future.”

The statement added: “Article 26.1.1 of the Constitution states that ‘The President may, after consultation with the Council of State, refer any Bill to which this Article applies to the Supreme Court for a decision on the question as to whether such Bill or any specified provision or provisions of such Bills is or are repugnant to this Constitution or to any provision thereof.’”

The Irish Times reports that about 100 people gathered at Áras an Uachtaráin (the residence of the President of Ireland in Dublin's Phoenix Park) to protest the President signing the bill into law.

Monday’s event was organized in part by former Solidarity TD Ruth Coppinger, who said: “Politicians should not think they can leave it up to people to take a case. That’s not acceptable. Ordinary people aren’t used to doing those things and don’t have the money or wherewithal. This has to be dealt with politically.”

She added: “It really is up to Fianna Fáil, Fine Gael, and the Greens to sort this out. It is not up to people to raise money and pay barristers.”

Campaigner Majella Connolly, who was born in and adopted from the St. Patrick’s home in Dublin, said: “Give me my basic rights.

“We don’t know where we’ve come from, we don’t know who we look like. I had to wait until the birth of my son to meet the first blood relation in my whole entire life.”

While President Higgins' ultimate decision to sign the bill into law was met with protests, legal experts said he likely had little choice other than to sign it.

Dr. Conor O’Mahony, senior lecturer at University College Cork School of Law, told The Irish Examiner: "All laws passed by the Oireachtas must be signed by him unless they fall within the exceptions set out in Arts [Articles] 26 or 27.

"Art 27 is a very specific exception that allows a Bill to be put to a referendum vote if a series of prescribed procedural conditions have been met.

"They were not met here, and so Art 27 could not be invoked."

Dr. O'Mahony added: "Signing the law was not unexpected and the President had little choice. The Bill is unlikely to be unconstitutional. It may raise separate issues of compliance with EU law which may arise in the courts, but this does not mean the Bill should not have been signed.”