“Good riddance” to Winston Churchill bust in the Oval Office

One British politician has slammed President Biden's removal of the Churchill bust as "a slap in the face." 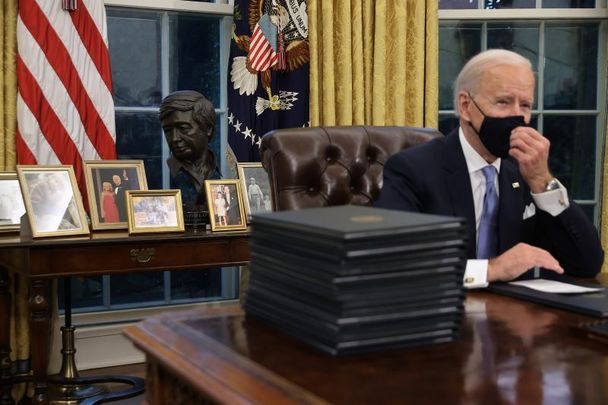 January 20, 2021: President Joe Biden in the Oval Office with a bust of Cesar Chavez in the background flanked by Biden family pictures. Getty Images

“Good riddance,” says Niall O’Dowd, founder of IrishCentral. “It was Churchill who ordered the Black and Tans into Ireland.”

The Black and Tans first arrived in Ireland in March 1920 at the behest of Prime Minister Churchill. As O'Dowd has previously written, "sending the murderous mob was the fatal mistake that drove Irish opposition to Britain to new heights."

President Biden's removal of the Churchill bust has drawn blowback from some British figures, including Brexiteer and Trump supporter Nigel Farage, who has previously urged Ireland to exit the EU.

“And Joe Biden was the vice president when Obama came here in 2016, looked down his nose at us, and said, if we dared to vote for independence we’d go to the back of the queue.

“So don't expect Biden to be a great friend of this country, he won't be.”

Vine noted how Biden “very much identifies” with his Irish heritage and will, therefore, likely “side with his ancestors” in any argument.

Farage replied: “That’s one thing, but to be photographed with people linked to the violent Irish Republican movement is quite another.”

Later, Farage said on Twitter that if the Churchill bust had indeed been removed, it is "a slap in the face to the British:

There are media reports that the bust of Winston Churchill has been removed from the Oval Office.

If true, this is a slap in the face to the British and any prospects of good relations. pic.twitter.com/DBHhygcuLf

Despite Farage's outrage, a spokesperson for British Prime Minister Boris Johnson responded saying: "The Oval Office is the president's private office and it's up to the president to decorate it as he wishes.

"I would point you back to what the prime minister has said previously about looking forward to working closely with Joe Biden.

"We're in no doubt of the importance that President Biden places on the UK and US relationship, and the prime minister looks forward to having a close relationship with him."

Johnson’s recent comments come in sharp contrast to when, in 2016, President Obama was reported to have moved the same bust.

Johnson, then the Mayor of London, wrote in an article: "Some said it was a symbol of the part-Kenyan President's ancestral dislike of the British empire - of which Churchill had been such a fervent defender.

"Some said that perhaps Churchill was seen as less important than he once was. Perhaps his ideas were old-fashioned and out of date.

"Well, if that's why Churchill was banished from the Oval Office, they could not have been more wrong."

However, President Obama later responded saying he had simply moved the location of the Churchill bust to "right outside the door of the Treaty Room, so that I see it every day, including on weekends, when I’m going into that office to watch a basketball game -- the primary image I see is a bust of Winston Churchill.

"It’s there voluntarily, because I can do anything on the second floor. I love Winston Churchill. I love the guy."

In 2017, President Trump brought the bust back into the Oval Office and said at the time: "I think most of us like Churchill.

“He doesn't come from our country but had a lot to do with it, helped us, a real ally."