Former U.K. Independence Party leader and Member of European Parliament told Dublin conference there was “a gap in the political market” to push for exit. 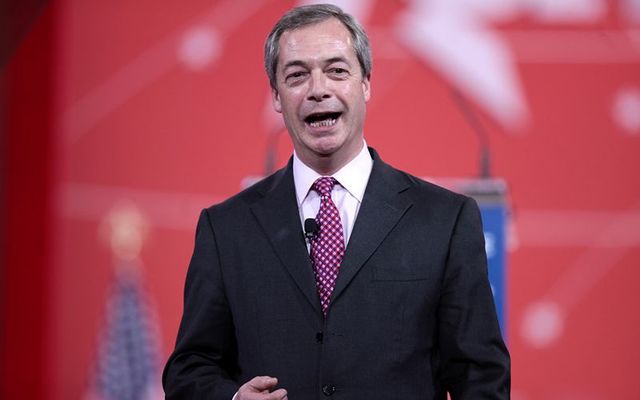 Former U.K. Independence Party leader and Member of European Parliament told Dublin conference there was “a gap in the political market” to push for exit.

The British politician who prompted Brexit, Nigel Farage, urged Irish people to also push next year for an exit from the European Union.

The former U.K. Independence Party (UKIP) leader told a 600-strong Dublin conference promoting “Irexit” there was “a gap in the political market” to push for exit from the EU.

Farage, who continues to be an MEP despite his opposition to the EU, urged anti-EU Irish voters to organize to contest the European Parliament elections in June 2019.

He maintained that what he called the “political media,” corporate interests and Irish civil servants working in the European Commission, had created a perception that most Irish people supported the EU.  He believes that Ireland is not a pro-EU country.

Nigel Farrage and John Waters were two of the big attractions at a conference on #Irexit in Dublin over the weekend. @newschambers went along, and he has a report on it all for us now #PKNT pic.twitter.com/RVtbcgjT9Z

He said that if an anti-EU party contested the 2019 European elections, it would “give the establishment the fright of its life.”

The Irexit: Free to Prosper conference was organized by the UKIP-led Europe of Freedom and Direct Democracy grouping in the EU Parliament.

Farage questioned Ireland’s political leadership after the “humiliating” experience of “being run by the troika” following the economic crash.  He insisted a large number of Irish people did not have the democratic representation they deserved.

“It is incumbent now upon you to organize, to mobilize, and put up candidates and fight those European elections in just 15 months,” he said.

This idea that Ireland is entirely pro-EU is completely wrong. I’m making speeches and taking part in events this weekend to spread that message. #Irexit pic.twitter.com/fOwPVjTYrZ

A roster of speakers questioning Ireland’s continued membership of the EU shared Farage’s conference platform.  They included Trinity College Dublin academic Anthony Coughlan, a long-time critic of EU membership. He said it would be “utter folly” for Ireland to remain in the bloc after Brexit.

He argued, “We can take back control of our laws, our borders, our currency, our fisheries, our foreign policy, and have a meaningful neutrality.”

WATCH | @Nigel_Farage on #Irexit: "I don't think Ireland is a pro-EU country. I think the political, media and big business class of Dublin - they're the ones [pushing the EU's agenda!]" pic.twitter.com/DLueZqcoy1

Writer and former newspaper columnist John Waters called for the removal of Ireland’s political leaders and the media.  He said that in order to remove the elected leaders Irish people had to have “a conversation.”

That meant removing the media “because they will not permit us to have a conversation,” he said.

Later, Waters told The Irish Times that he was not a politician, but if nobody else stepped forward as a candidate for the “alternative voice” not heard in Irish politics, but represented at the conference, he would.

Do you think the former UKIP leader could be right? Should Ireland consider leaving the European Union? Let us know in the comment section below.