Irish and American politicians gathered in Washington, DC on Wednesday to discuss, among other things, Brexit. 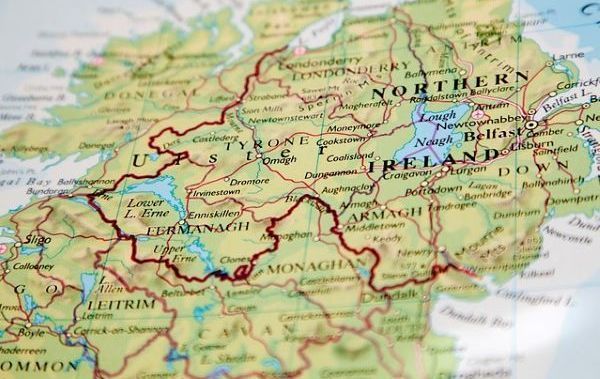 The Irish lobby in Washington, DC has warned that a Brexit hard border could threaten future trade deals. Getty

British politicians have been warned that if Brexit compromises The Good Friday agreement, it will, in turn, compromise UK-US trade agreements.

The Irish Times reports that the Irish lobby in the US joined together on Wednesday evening for a ceremony to commemorate the 100th anniversary of the Dail.

The Tánaiste @simoncoveney paid heartfelt tribute this evening @uscapitol to @RepRichardNeal & @RepPeteKing & the Congressional Friends of Ireland caucus for all the Members have done to cherish the relationship between our two peoples  pic.twitter.com/9Uk9zJwX99

At the event, Republican congressman Peter King said: “If the British want to consider any type of trade agreement with the United States it is important that the soft border is maintained.”

“What influence we have, we will use it, in the Friends of Ireland, we will definitely speak out," he added.

'If the British want to consider any type of trade agreement with the US, it's important that that soft border be maintained' @RepPeteKing #Brexit pic.twitter.com/OL5J1Phf1b

At the event, Neal said: “I think that America is heavily invested in the success of the Good Friday Agreement and anything that might disturb the success that America offered certainly would not be welcomed, that’s for sure.”

“I think there are few parts of American foreign policy that have worked as well as being an honest broker in the run-up to the Good Friday Agreement, so we take great satisfaction in what happened and undoing it for a problem that appears as though the British government got themselves into, I think would be a step backwards.”

Neal went on to applaud Ireland’s performance throughout Brexit negotiations:  “The way that the Irish government has remained so firm on that border is so gratifying to us here.”

“It is extraordinary that that border has been as successful as it has been and there might even be a debate about going back to checkpoints,” he said.

.@RepRichardNeal says that while the US would find it desirable to have a bilateral trade agreement with the UK, he will continue to raise concerns over any return to a hard border #Brexit https://t.co/jzuwjRIsSw pic.twitter.com/0e5dJXEP3o

In his speech,  Tanaiste Coveney said: “Staunch and steadfast friends here tonight have been among our most formidable allies as we face the deep challenges posed by Brexit and the overriding need to avoid a return to a hard border on the island of Ireland.”

Referencing a meeting earlier in the day with US Secretary of State Mike Pompeo, Coveney said: “I made it very clear to him that we’re not asking the US to take sides – Ireland over the UK or UK over Ireland.”

“But we are asking people here to think about a peace process that they have been very much involved in creating and sustaining, and using influence to ensure that decisions that are taken in relation to Brexit don’t undermine that progress.”