President Donald Trump is using his Doonbeg, County Clare golf resort as a base, while he visits Europe to commemorate the 75th anniversary of D-Day. 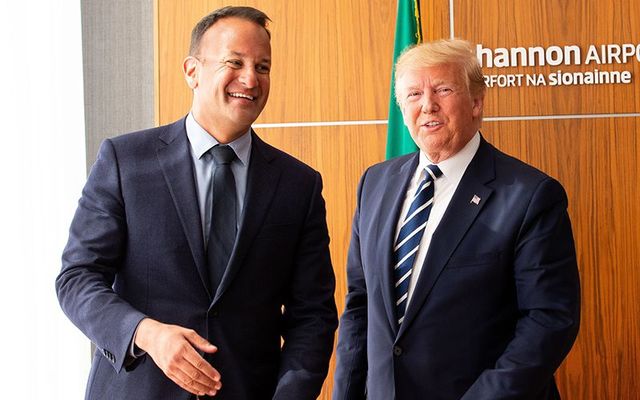 President Donald Trump is using his Doonbeg, County Clare golf resort as a base, while he visits Europe to commemorate the 75th anniversary of D-Day. This is his first visit to the Emerald Isle since before the 2016 election.

6 pm: The Baby Trump balloon famous from the London protests has made its way across the Irish Sea and is now flying through Irish skies.

#WATCH The Trump baby blimp has made its Irish debut ahead of a demonstration at the Garden of Remembrance in #Dublin@NewsChambers has the details#TrumpInIreland #TrumpVisit #VMNews pic.twitter.com/xdiAna957W

10.40: Trump arrived in Normandy, France where he will attend the D-Day commemorations with the French President Emmanuel Macron. The event took place at the Normandy American Cemetery.

The leaders will then hold talks followed by a lunch.

According to the White House, he will tell allies they are gathered "on Freedom’s Altar” and that “our cherished alliance was forged in the heat of battle, tested in the trials of war, and proven in the blessings of peace.”

“America is never as great as when it fights for the liberty of others and when it holds these values to its heart,” Macron said. “We must show ourselves worthy of the heritage of peace and worthy of the promise of Normandy.”

Addressing D-Day soldiers, Macron said, in English: "On behalf of my nation, I just want to say thank you."

You can watch the live streamed event here:

President Donald Trump and First Lady Melania have boarded Air Force One and are en route to France to commemorate the 75th anniversary of World War II’s D-Day landings. The POTUS and his wife will return to Doonbeg, in County Clare on Thursday afternoon.

Before take-off, Trump spoke briefly to the press mentioning progress in negotiations with Mexico and the pressure he's putting on China. He said the United States is prepared to place tariffs on another $300bn of imports from China and said Beijing "wants to make a deal badly... A lot of interesting things are happening".

Speaking about Mexico he said "something pretty dramatic could happen" in the coming days.

Thursday, June 6, Trump will depart from Ireland for France, where he will attend ceremonies marking the 75th anniversary of the D-Day landings at Normandy.

It is believed that he will return to Ireland again Thursday evening to spend another night at Doonbeg, before departing for the US on Friday. 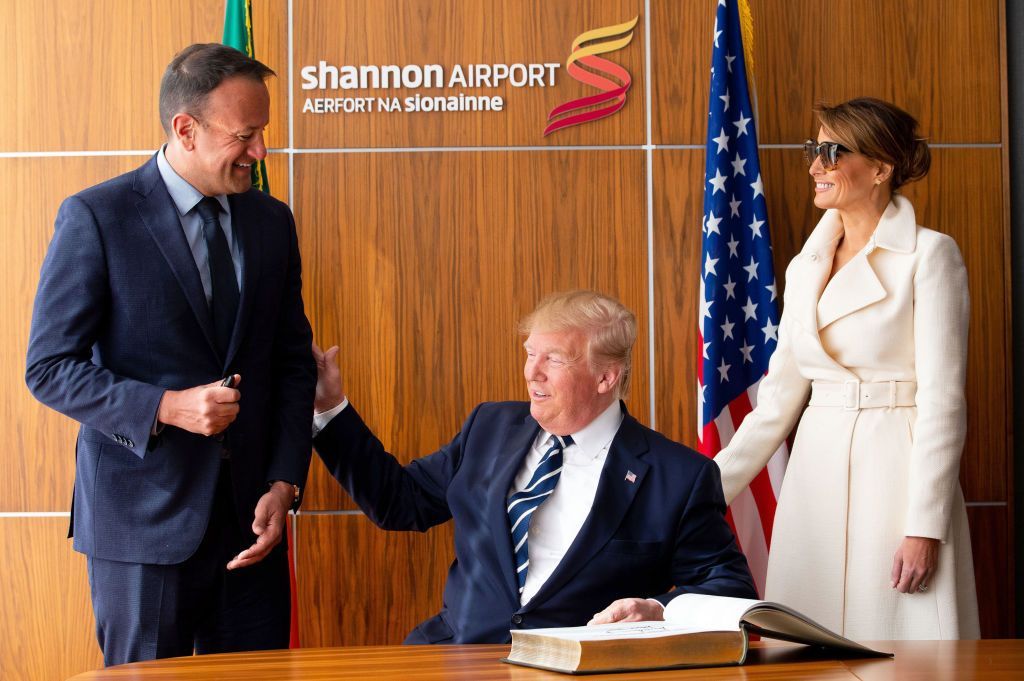 After the conference and hour-long meeting with Taoiseach Varadkar at Shannon Airport, President Trump and the First Lady took the Marine One helicopter to Doonbeg, where they will be spending the night.

.@realDonaldTrump and @FLOTUS Melania landing on Marine One in Doonbeg, Ireland!☘️ pic.twitter.com/uVU9kEZwnx

Trump purchased the Co. Clare golf resort in 2014, and this will be his first time visiting it since then. His plans for the course, which involve proposals to build a wall to prevent coastal erosion, have been a point of contention with local environmentalists.

Garda performed a thorough sweep of the grounds prior to his arrival.

It wasnt just golf balls being searched for in Doonbeg ahead of President Trump's Visit.#TrumpInIreland pic.twitter.com/QGU0jR4DpA

Trump's visit to Ireland marks the largest Garda (Irish police) operation since President Bush's 2004 visit. 1,500 uniformed members of the gardaí will be on duty every 24 hours, supported by an additional 500 police from specialist teams.

As IrishCentral previously covered, though Trump protests will be taking place throughout Ireland, the people of the town of Doonbeg largely hold warm feelings for him. The resort employs 300 locals, which as local pup owner Hugh McNally stated, is a pretty big deal:

“The golf course to us is akin to the whole technology sector in Dublin. There are 300 people in Doonbeg, that is worth is about 10,000 jobs in Dublin,” said McNally.

Doonbeg organized a ceili to welcome the Trumps.

Another side to this Trump tour: Doonbeg is putting on a trad music and dancing show to welcome @realDonaldTrump. Many who live here will tell you his investment in the Doonbeg golf course saved the town and brought jobs, so they’re flying the US flag in tribute tonight. @itvnews pic.twitter.com/3YMcgbpPUt

And locals are hopeful that the Trump sons may pop down to the village for a visit.

Expectations are high that the Trump sons Eric and Donald Junior may arrive to press the flesh here in Doonbeg...but for now the ceili is in full swing. @ClareChampion #Trump #Doonbeg pic.twitter.com/YwVRLezgYm

Farmer John Flanagan whose 30 acres border Trump’s West Clare golf resort says it would be ‘wonderful’ if someone of @realDonaldTrump’s ‘calibre’ passed through a small village like Doonbeg on his visit #TrumpInIreland #TrumpVisit pic.twitter.com/40YWVLpQW5

A rare anti-Trump protester in Doonbeg, John Lennon from Cork, says he is ‘ashamed’ that the Taoiseach is meeting someone at Shannon Airport who has ‘no respect for women or the truth’ - @IrishTimes pic.twitter.com/DGt5brced2

Trump and Varadkar met for close to an hour. Varadkar spoke to the press afterward, framing it as an important opportunity for him to tell Ireland's side of the Brexit debate, with Trump likely getting pro-Brexit views during his previous three days in the UK.

Near Shannon Airport, protesters have gathered - the larger group, on one side of the road, is protesting Trump and his policies, and a smaller group on the other side is there to show support.

The Journal went live from the scene:

We're at Shannon where an anti Trump and smaller pro Trump demonstration is taking place.

Other protests are taking place tomorrow in Cork and Sligo, and the largest protest is planned for Thursday in Dublin.

Trump wished Varadkar the best with his "wall" and suggested Brexit might be good for Ireland. 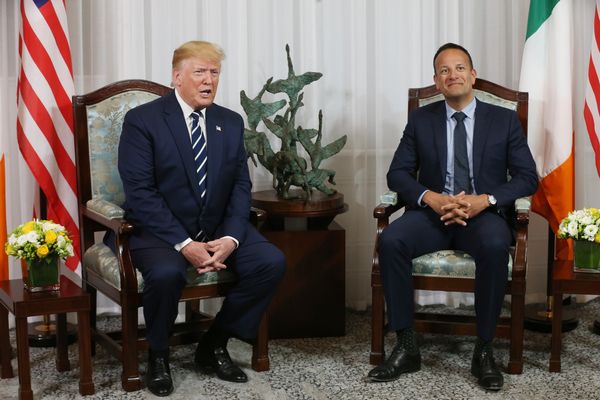 Trump stated that he and Vardkar would be discussing Brexit, trade, and the military.

"Probably you'll ask me about Brexit because I just left some very good people who are very much involved with Brexit as you know, and I think it will all work out very well," Trump said.

"And also for you, with your wall, your border. We have a border situation in the United States and you have one over here, but I hear it's going to work out very well."

"The main thing, we want to avoid, of course, is a wall or a border," Varadkar replied.

"I know that's a big point of contention with Brexit is your border and I'm sure it's going to work out well."

Trump asked if he's just here to promote his golf course in Doonbeg.

"We have millions of Irish and I think I know most of them because they're my friends.

"We do a lot of business together, a lot of tourism together.

Significantly, he also touched on the topic of E3 visas, saying "I think we’re going to be in good shape."

While Trump and Vardkar met, First Lady Melania Trump was treated to a "demonstration of Irish culture".

Though press were not permitted, it appears to have been a less ostentatious demonstration than the red carpet, harp and fiddle players and singer who greeted Trump when he last visited Ireland in 2014.

Air Force One touches down at Shannon Airport a little before 4:45 pm local time.

On the agenda is a meeting with Taoiseach (Prime Minister) Leo Varadkar at Shannon Airport. Trump will then depart for the Trump International Resort and Golf Course in Doonbeg Co. Clare, which his family owns. Protests are planned throughout the country to coincide with his stay.

He and Melania signed the Shannon guest book.

US President @realDonaldTrump and the US First Lady Melania Trump have arrived in Ireland. @rtenews pic.twitter.com/PwrfLaMaRx

President Trump and his wife Melania were greeted on the runway by Taoiseach Leo Varadkar, who shook Trump's hand and gave Melania a kiss on the cheek.

Varadkar shakes Trumps hand and kisses Melania on the cheek as they arrive in Ireland pic.twitter.com/lXj4cm9ae6

Irish Environmentalists have a message for Trump at Doonbeg