Friends of Sinn Fein made history by raising more money than any other political party in Irish history. 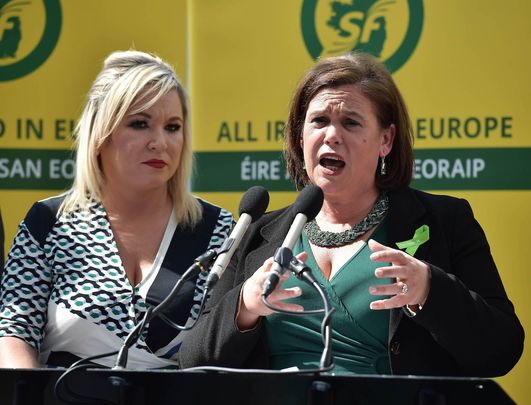 Friends of Sinn Féin made history by raising more money than any other political party in Irish history in Manhattan on Thursday evening.

Sinn Féin passed the $15 million fundraising mark with another sell-out dinner in Manhattan, New York, on Thursday night. The event, attended by 700, was held in the midtown Sheraton Hotel ballroom. The political party has been fundraising since 1995 to reach the $15 million total.

Sinn Féin President Mary Lou McDonald was on hand with a strong message that the party has never been stronger and would lead the battle against Brexit in the upcoming Northern Ireland election and perform very well in the upcoming Irish election, in 2020. She thanked those present for their continued support.

There will be a special focus in the future on ensuring a united Ireland referendum and gaining support from Irish America, said Sinn Féin sources.

The Friends of Sinn Féin organization was formed in 1994 after the first Irish Republican Army (IRA) ceasefire and has now raised a record amount for any Irish political party in America. Other parties including Fine Gael and Fianna Fáil have tried to fundraise in America but have had little success.

This year’s event was, as usual, heavily supported by Irish leaders in the construction trade including many up-and-coming builders who are making their mark in Manhattan.

Present at their first event, in 1995, at the Essex House near Manhattan’s Central Park, was construction magnate Donald Trump who shook hands with then Sinn Féin leader Gerry Adams.

AP reported that the first bash had a celebrity feel to it writing: “Barred from the United States until last year, Adams drew celebrities and supporters to a posh Manhattan hotel for an unprecedented fund-raiser Wednesday.

"Bianca Jagger, Tom Hayden, movie maker Michael Moore, and ex-mayor David Dinkins were among those paying $200 a plate to rub shoulders with Adams as Irish nationalist fundraising came out of the closet."

Adams had been barred from entering the US until January 1994, when then-President Bill Clinton approved Adams for a 48-hour visa, despite widespread protest from US and British officials.