Report warns of republican and loyalist violence over Brexit 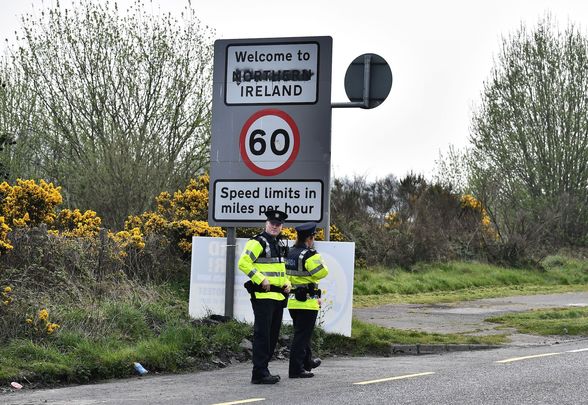 Irish police at the Northern Ireland border as it stands. Getty

As political parties in Britain and Northern Ireland campaign for a December 12 general election prompted by Brexit, the report says that Brexit has the potential to fuel the violence which lingers in the North more than two decades after the Good Friday Agreement.

The watchdog Independent Reporting Commission report found that a “situation of great complexity” had emerged because of both Brexit and the almost three-year-old suspension of the devolved, power-sharing government that the peace deal ushered in.

Police on both sides of the Irish border have said Britain’s impending departure from the European Union, which had guaranteed unfettered trade across the frontier, risks stoking violence among the small nationalist and unionist militant groups that remain active.

The watchdog said, “We understand why people make that claim, but the issues surrounding paramilitarism, and why it continues to exist, long pre-date Brexit.

“The real issue about the dangers for peace in Northern Ireland, therefore, is not that Brexit itself could be the direct cause of a renewal of violence, but rather that it has the potential to add fuel to the fire of continued paramilitarism.”

The commission, whose four members were nominated by the British, Irish and Northern Irish governments to work confidentially with local communities, said it continued to believe that the greatest boost to efforts to end paramilitarism would be the return of the North’s power-sharing government.

Despite repeated attempts at talks, Stormont and power-sharing in Northern Ireland have still not been restored since the fall-out between Sinn Féin and the Democratic Unionist Party in January 2017.

Stormont, where the National Assembly was head in Northern Ireland until Jan 2017.

One of the most notorious incidents of paramilitary violence in the North was the murder in April of 29-year-old journalist Lyra McKee, who was killed in Derry by the New IRA.

Most members, the commission reports, are what it calls dormant, or not involved in criminal activity on a day-to-day basis.