In the new book 'American Carnage,' Paul Ryan says of President Trump "I wanted to scold him." Trump has responded in a series of tweets and comments. 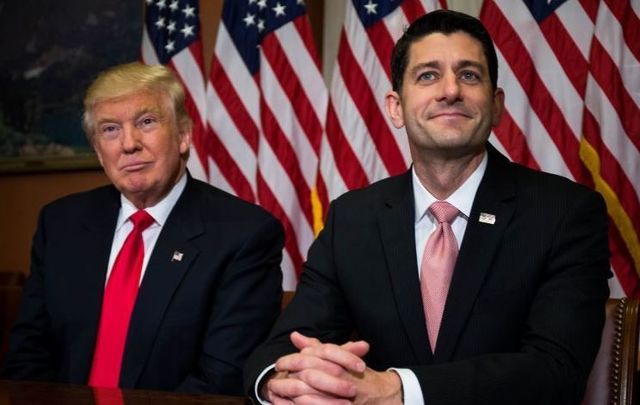 “I wanted to scold him,” Paul Ryan says of President Trump in Tim Alberta's new book.

Paul Ryan reveals how he really felt about the president in Tim Alberta's new book 'American Carnage.' In person and on Twitter, Trump has responded.

Read More: A piece of US Irish history gifted to Ireland by Donald Trump

Having received an advanced copy of 'American Carnage,' White House reporter Josh Dawsey, writing for The Washington Post, says: “The book details how many Republicans who once criticized Trump quickly changed their tune after his election, striking a devil’s bargain with a man Alberta describes in the book as behaving in a way that is dishonest, amoral, narcissistic and uninformed.”

Among the Republicans featured on-the-record in the book, due to be released on July 16, is former Speaker of the House Paul Ryan, who retired in 2018 - a move that Alberta claims was an "escape hatch."

Of Ryan, Dawsey writes in The Washington Post: “Perhaps no one has had a more tortured relationship with the president than former House speaker … who went from wanting to abandon Trump after the release of the “Access Hollywood” tape to working to enact his agenda after the election all while doing his best to avoid commenting on his tweets and controversial statements.”

Read More: This July 4th it does not feel so good to be an American

In 'American Carnage,' Ryan is quoted saying: “We’ve gotten so numbed by it all. Not in government, but where we live our lives, we have a responsibility to try and rebuild. Don’t call a woman a ‘horse face.’ Don’t cheat on your wife. Don’t cheat on anything. Be a good person. Set a good example.”

Reflecting on Trump's election, Ryan told Alberta: “I told myself I gotta have a relationship with this guy to help him get his mind right. Because, I’m telling you, he didn’t know anything about government . . . I wanted to scold him all the time.”

He added: “Those of us around him really helped to stop him from making bad decisions. All the time, we helped him make much better decisions, which were contrary to kind of what his knee-jerk reaction was. Now I think he’s making some of these knee-jerk reactions.”

Worth noting is that Tim Alberta clarified on July 12 that Ryan was not paid for his 'American Carnage' interview:

I can confirm that I did not pay Paul Ryan for the interview. (He did, however, offer me a Miller Lite at 2pm.) https://t.co/AdFw6N5Gg4

Following Ryan's retirement announcement last year, Trump tweeted: “Speaker Paul Ryan is a truly good man, and while he will not be seeking re-election, he will leave a legacy of achievement that nobody can question. We are with you Paul!"

Speaker Paul Ryan is a truly good man, and while he will not be seeking re-election, he will leave a legacy of achievement that nobody can question. We are with you Paul!

However, the President has since changed his tune about Ryan in the wake ‘American Carnage.’ In the early hours of July 12, the day after The Washington Post article was published, the President tweeted:

Paul Ryan, the failed V.P. candidate & former Speaker of the House, whose record of achievement was atrocious (except during my first two years as President), ultimately became a long running lame duck failure, leaving his Party in the lurch both as a fundraiser & leader......

In the three-tweet thread, Trump said: “Paul Ryan, the failed V.P. candidate & former Speaker of the House, whose record of achievement was atrocious (except during my first two years as President), ultimately became a long running lame duck failure, leaving his Party in the lurch both as a fundraiser & leader......”

“....When Mitt chose Paul I told people that’s the end of that Presidential run. He quit Congress because he didn’t know how to Win. They gave me standing O’s in the Great State of Wisconsin, & booed him off the stage. He promised me the Wall, & failed (happening anyway!)......”

“....He had the Majority & blew it away with his poor leadership and bad timing. Never knew how to go after the Dems like they go after us. Couldn’t get him out of Congress fast enough!”

Later on July 12, Dawsey tweeted that President Trump had more comments about Ryan:

Trump: “Paul Ryan was not a talent. He was no leader…he wouldn’t get subpoenas... when Nancy Pelosi hands them out like they’re cookies. He was unable to raise money, he lost control of the house. The only success Paul Ryan had was the time he was with me.”

What do you make of Paul Ryan's comments and President Trump's response? Let us know in the comments