Despite his gaffes, including comparing the Northern Ireland post-Brexit to Mexico's border, but reading too much into his off the cuff remarks here is probably a mistake 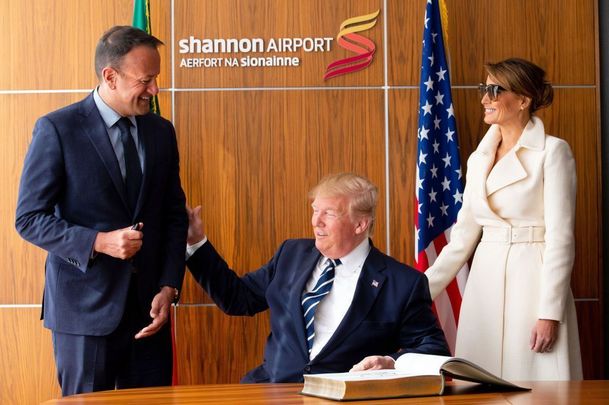 Despite his gaffes, including comparing the Northern Ireland post-Brexit to Mexico's border, but reading too much into his off the cuff remarks here is probably a mistake

The most tiresome pronouncement during President Trump’s visit to Ireland last week was not anything The Donald himself had to say.  He did put his foot in his mouth once or twice when he was here but that was by accident rather than design and he meant no harm.

His relaxed and sunny mood made that clear, as well as his repeated declarations of love for Ireland and his best wishes for our future.

The most publicized gaffe was his clumsy attempt to draw some kind of parallel between the border in Ireland and the U.S.-Mexican border.   Taoiseach Leo Varadkar quickly put him right on that one and he walked it back.

It seemed shocking that he could be so ignorant of the Irish situation, but whether we like it or not it is possible.  There are some 200 countries in the world and we can’t assume that Trump knows much more about Ireland than other small countries, despite having a golf course here. 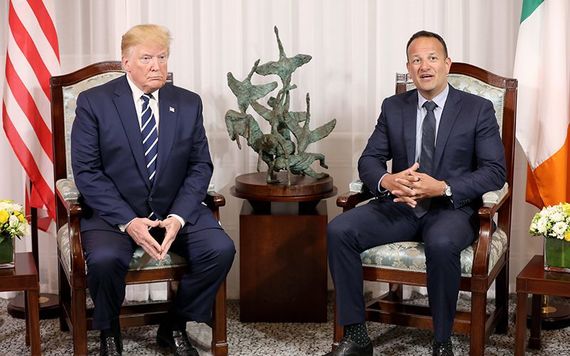 Donald Trump and Leo Varadkar speaking to the press at Shannon.

The more likely explanation is that he was simply trying to say that the U.S. has a situation with a border and so does Ireland, not that they are the same.   It’s an inane observation anyway and as often happens with Trump, it came out wrong.

Far more worrying was his aside that Brexit could be good for us, a claim that shows a truly shocking lack of understanding about the challenges we face.

All this, however, was just Trump being Trump.  He was winging it during what he regarded as some downtime at his golf club in Doonbeg, Co. Clare, a break from the demanding schedule of his state visit to Britain and the D-Day commemorations in France.   Reading too much into his off the cuff remarks here is probably a mistake.

Just as irritating as the Trump speak was the stuff that came from two homegrown sources, our own president, Michael D. Higgins, and the relatively small number of protestors in Dublin and at Shannon.

With Higgins was a matter of timing as well as what he actually said.  He accused the U.S. (meaning Trump) of making “regressive and pernicious” decisions in relation to combating climate change.

That our president would use a word like "pernicious" in reference to President Trump was bad enough, even though we're used to such overblown language from him.   But to do it the day before Trump arrived in Ireland showed poor judgment as well as a lack of manners.

Of course, Trump is wrong about climate change and we all know that.   He probably knows it himself, and he's not the first politician to adopt a self-serving position on an issue for electoral reasons.

But he’s not stupid so you can expect him to start modifying his skeptical stance at some point.  If the promises on carbon emissions by Joe Biden or Elizabeth Warren start to gain traction with American voters, Trump will backtrack and fudge when he thinks the time is right.

It’s also worth remembering that Higgins’ righteous rage about climate change comes from the man who not so long ago demanded a big new limo from the government to carry him around in the style he feels is appropriate.  Not much thought for the environment then.

Nor when he flew from Dublin to Belfast for an engagement instead of taking the car -- and please don't tell me his schedule meant he could not have used his limo (it’s a 90-minute drive).   Plus there are all the foreign trips he undertakes, sometimes involving very expensive hotels, all of which adds to his carbon footprint.

Higgins’ real problem is that -- like the liberal media -- he can’t stand Trump, who is too boorish for our president’s refined and delicate sensibilities.  Mind you, Michael D. is perfectly happy to meet the president of China despite the appalling human rights record over there.  And of course, his heroes include Castro and some of the Central American revolutionary leaders who turned out to be as bad as the regimes that preceded them, one of the main reasons we have the current situation at the U.S.-Mexican border.

The slogans on the placards carried by many of the protestors in Dublin and Shannon were not just inane but simply wrong.  Hating Trump has become a badge of honor for the protesting brigade which turns out at demonstrations because it makes them feel virtuous.  You don't have to like Trump as a person, but this relentless and often simplistic demonizing of him is making an objective assessment of his presidency impossible.

An example of this at the Dublin and Shannon demos were posters branding Trump a warmonger.   This is laughable since Trump is all about reducing America's involvement abroad and bringing the troops home -- so far under Trump the U.S. has not embarked on any new foreign wars.

This is a departure from recent presidents, including Barack Obama who killed millions.  This is not to say that Trump is right and Obama was wrong -- these are complex matters and circumstances change -- but to call Trump a warmonger at this stage is ludicrous.

It’s the same on immigration.  Trump’s generalizing language about Mexicans has been unfair and uncouth (despite the reality of the gang violence), but he is facing a dire situation at the border as the recent monthly figures for those crossing illegally into the U.S. show.  Instead of waving the migrants through, Mexico will now have to do a lot more to avoid the tariffs Trump has threatened, a policy that appears to have worked.

Dealing with the complex issues involved in illegal immigration is far from easy as we have seen in Europe, particularly sorting out genuine refugees from the majority who are economic migrants.  The protestors here, of course, can’t be bothered with any of this.

It’s far easier to carry a placard that brands Trump a racist.  Yet many of the same people gave a hero’s welcome in Dublin to Obama, even though some child separation at the border also happened on his watch. The fact that Obama deported over two million people during his time is conveniently forgotten by the Trump critics.

As well as accusing Trump of being a racist, some of the placards at the demo in Dublin called him a misogynist, based on his “locker room” reference to where he likes to grab women and a few seedy affairs.  His potty mouth and behavior may be far from admirable.

But on this score, he is in the half-penny place in comparison with what Saint John F. Kennedy and Blessed Bill Clinton got up to.  He has not shared a mistress with the mafia or seduced an intern, after all.  Yet the same people here who routinely refer to Trump as a misogynist still deify JFK and Clinton.

On jobs and the economy, even Trump’s enemies grudgingly have to admit that he's doing something right.  How long it will last we don't know, but so far so good.

He’s right about China and at least he's seriously challenging them, unlike his predecessors.  He's also right about the way other countries have been exploiting the U.S. with their trade imbalances, the EU in particular, including Ireland.

His so-called trade wars have a purpose, to level the playing field for the U.S.  It's a bit of a shock for other world leaders to have to deal with a U.S. president who is unafraid to take abrupt and drastic action, but their complaining does not mean Trump is wrong.

On foreign policy, the jury is still out. Trump is right to confront Iran, which continues to be the source of so much of the terror in that part of the world.

His disdain for the hugely generous deal Obama did with Iran is understandable since it has not bought a change in their behavior.  And his sanctions may yet encourage the younger generation of Iranians who are deeply unhappy with the regime to seek change.

On Russia, he may be playing best buddies with Putin, but he has kept on the heavy sanctions that are impacting the Russian economy.  As he says himself, we'll see what happens.

And it’s the same with Little Rocket Man, who was flattered into reducing his nuclear tests and missile launches -- keeping the pressure on and pulling the rug on the talks so infuriated the little dictator that he is back to executing those around him.  But progress may yet come.

All told, whatever one thinks of Trump’s brash persona and his posturing, a fair assessment has to be that he's not doing too badly so far.  And it would be a stupid mistake for Ireland to get on the wrong side of him.