Nancy Pelosi and Richard Neal are set to visit Ireland this month with a delegation of American politicians. 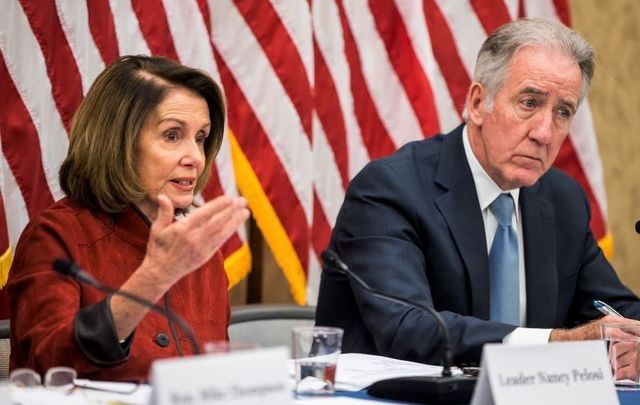 Nancy Pelosi and Richard Neal are set to visit Ireland this month with a delegation of American politicians. Getty Images

Nancy Pelosi is set to lead a delegation of US politicians in a visit to Ireland in hopes of securing a new visa deal.

The Irish Times reports that Pelosi, who currently serves as the Speaker of the House in the US, will be joined by Congressman Richard Neal among others in a visit to Ireland that is reported to begin on April 15.

In Ireland, the US delegation will reportedly meet with Taoiseach Leo Varadkar, members of the Oireachtas, and will also visit the Northern Ireland border.

Read More: To solve the Brexit crisis, time to put special status for Northern Ireland back on the table

Congressman Richard Neal serves as the head of the US Ways and Means Committee, which will oversee any future trade deals between the US and the UK after Brexit, and is also the co-chairman of the Friends of Ireland caucus.

Last year, Congressman Neal was a supporter of the E3 visa bill that would have introduced a new batch of US visas to Irish people. The bill is expected to be reintroduced this year.

Waterford TD John Deasy, the Irish government’s special US envoy, said: “It was clear from our meetings around St Patrick’s Day that both the Republican and Democratic leadership offices want to continue to pursue the E3 Bill.

“Both Speaker Pelosi and president [Donald] Trump told us they are behind efforts to get this finished and Congressman Neal is one of its driving forces in the House. The congressional delegation visiting Ireland is an important step in continuing that process.”

Congressman Neal was also one of a number of American politicians who wrote a letter to UK Prime Minister Theresa May warning of the consequences of a hard border in Ireland.

“America is a guarantor of the Good Friday agreement, and we don’t want to see any fractures. The idea that there would be any sort of tactical retreat on the border is unacceptable here.”