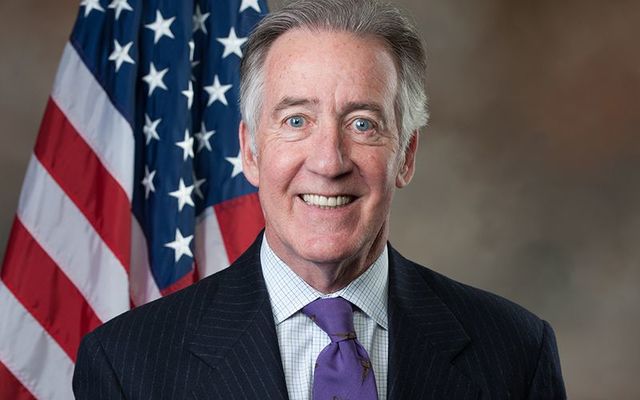 The new power brokers in Washington, D.C. are featured in the February issue of Vanity Fair in an article and sumptuous backlit photos like they were on a Hollywood set.

On the right-hand side in one of the pics stands a man familiar to every activist Irish American, Congressman Richie Neal, an “overnight” star in Washington after 26 years on the Ways and Means Committee he now chairs.

For Irish Americans, used to seeing Neal on the Irish border or meeting with Gerry Adams, the dissonance is obvious but very welcome. There has been no one else in Congress who has paid as much attention to the Irish issue.

To his Irish supporters’ delight, Neal now has real clout.  His chairmanship means he’s the man who could stop funding for President Trump’s wall, and create massive problems for Brexit treaties.

Neal is strongly aided by the presence of Congressman Brendan Boyle from Pennsylvania, the rising star in Irish American politics who also sits on the Ways and Means Committee.

Ways and Means is a permanent committee of the House of Representatives, which makes recommendations to the House on all bills for raising revenue. The committee is the principal source of legislation concerning issues such as taxation, customs duties, and international trade agreements.

When you also consider that Neal could severely damage President Trump’s re-election bid if he gets access to his tax returns which experts say he may be entitled to, then you realize that he is playing for very big stakes indeed.

Not that that will phase Neal, a battle-hardened veteran of Washington politics who suddenly finds himself a master and commander of every buck that the government is allowed to spend—including, many argue, on walls in Mexico.

Oh, and he gets to scrutinize every international treaty which could be very important if the British Brexiteers show up looking for new trade deals if they finally disengage from the EU. How they do that will be of paramount interest. Neal will be watching especially closely.

The Boston Globe described him as a “patient man in a hurry,” having spent 26 years on the Ways and Means Committee. He is now finally in charge at age 70 and in a hurry to fulfill his priorities.

His Democratic blue-collar roots in the gritty town of Worcester, Massachusetts are clear for all to see.  He is an old fashioned Democrat, one unafraid to speak his mind. Neal’s oft-quoted remark is, “The slogan of the modern Republican party is 'We are rich and we're not going to take it anymore.’”

He is unbeatable in his home district, winning his primary 70-30 and having no opponent in the general. Civil rights in Northern Ireland and in America remains his passion.

His best friend in Congress is John Lewis, the legendary survivor of Dr. Martin Luther King’s movement who was at Selma and is now a member of the House.

Neal's mother died of a heart attack when he was 13.  He was attending Springfield Technical High School when his father, an alcoholic, died.

Neal and his sisters moved in with their grandmother, and later their aunt, and were forced to rely on Social Security checks as they grew up.

Now he is also one of the most important politicians in America. To no one’s surprise, he was also recently appointed the chair of the Friends of Ireland in Congress.

Britain and Brexiteers beware. We Irish are lucky to have him there.