Michigan State Senator Mallory McMorrow has gone viral for her impassioned speech responding to accusations made by State Senator Lana Theis in a fundraising email. 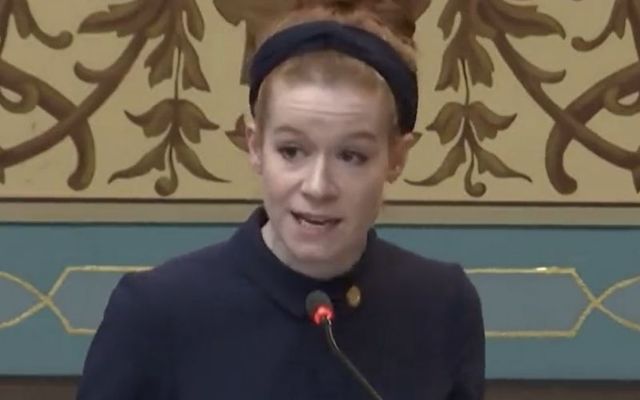 State Senator Mallory McMorrow forcefully responded after being accused of wanting to "groom and sexualize kindergarteners" in a fundraising email from State Senator Lana Theis.

McMorrow, who says she is "the most Irish American state senator," delivered her nearly five-minute response on the Michigan Senate floor on April 19, the day after Theis issued her accusatory fundraising email.

Theis, a Republican, claimed in her email blast that children are "under assault in our schools," including by “Progressive social media trolls like Senator Mallory McMorrow (D-Snowflake) who are outraged they can’t teach can’t groom and sexualize kindergarteners or that 8-year-olds are responsible for slavery."

The email came after three Democrats, including McMorrow, walked out of an invocation that Theis delivered on the Michigan Senate floor on April 13 in which she prayed for children who she said are “under attack” from “forces."

McMorrow responded to Theis' accusations on April 19 in a speech on the Michigan Senate floor. Afterward, she shared a video of her speech on Twitter, which racked up more than 241k likes and more than 13.7 million views in just over two days.

Senator Lana Theis accused me by name of grooming and sexualizing children in an attempt to marginalize me for standing up against her marginalizing the LGBTQ community...in a fundraising email, for herself.

Hate wins when people like me stand by and let it happen. I won't. pic.twitter.com/jL5GU42bTv

In her speech, McMorrow said: "I didn't expect to wake up yesterday to the news that the Senator from the 22nd district had overnight accused me by name of grooming and sexualizing children in an email fundraising for herself.

"So I sat on it for a while wondering, why me? And then I realized, because I am the biggest threat to your hollow, hateful scheme.

“Because you can't claim that you are targeting marginalized kids in the name of 'parental rights' if another parent is standing up to say no.

"So then what? Then you dehumanize and marginalize me. You say that I'm one of them. You say, 'She's a groomer. She supports pedophilia. She wants children to believe that they were responsible for slavery and to feel bad about themselves because they're white.'"

McMorrow then discusses her understanding of "service" that she learned through her upbringing as a Christian and her time at the University of Notre Dame.

“So who am I? I am a straight, white, Christian, married, suburban mom who knows that the very notion that learning about slavery or redlining or systemic racism somehow means that children are being taught to feel bad or hate themselves because they are white is absolute nonsense. No child alive today is responsible for slavery. No one in this room is responsible for slavery.

"We are not responsible for the past. We also cannot change the past. We can't pretend that it didn't happen, or deny people their very right to exist.

"I am a straight, white, Christian, married, suburban mom. I want my daughter to know that she is loved, supported, and seen for whoever she becomes. I want her to be curious, empathetic, and kind.

"People who are different are not the reason that our roads are in bad shape after decades of disinvestment, or that healthcare costs are too high, or that teachers are leaving the profession.

"I want every child in this state to feel seen, heard, and supported, not marginalized and targeted because they are not straight, white, and Christian.

"We cannot let hateful people tell you otherwise to scapegoat and deflect from the fact that are not doing anything to fix the real issues that impact people's lives.

"And I know that hate will only win if people like me stand by and let it happen.

"So I want to be very clear right now: Call me whatever you want. I hope you brought in a few dollars. I hope it made you sleep good last night.

"I know who I am. I know what faith and service mean, and what it calls for in this moment.

"We will not let hate win."