Governor Kathy Hochul said she will fight for all people, including those like her impoverished Irish grandparents who sought opportunity in New York, in her inaugural address. 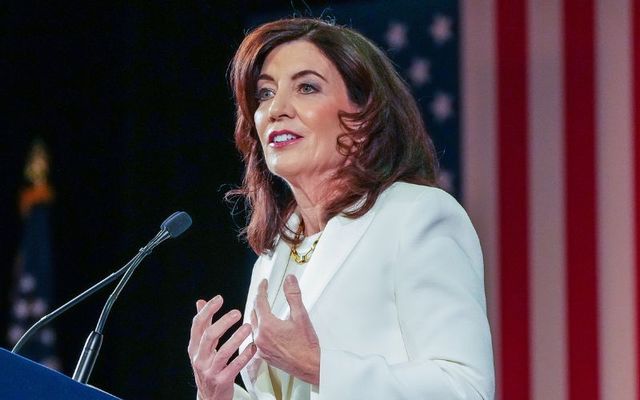 Kathy Hochul, the first-ever woman to be elected as the Governor of New York and a proud Irish American, said she will fight for all people in her inaugural address.

“I'm here to fight for the people,” Hochul said in her inaugural address on January 1, 2023.

“Everyone, no matter where they came from, how they got here - to those whose ancestors came here in bondage on slave ships, and others who saw opportunity and saw New York as a shining beacon, drawing millions from every corner of the planet, just like my impoverished grandparents left Ireland as teenagers came through Ellis Island.

“And because of that, we are home to the most diverse population - people of every color, creed, national origin, and orientation call New York home.

"And for the next four years, our sole mission will be to lift up every New Yorker and make a difference in their lives, so their tomorrows will be better than their yesterdays.”

But above all, when we are united, there's no stopping us. And there is no fight that is right that we will ever back down from. pic.twitter.com/luV1JKRjYp

Hochul became the first-ever female to be elected as the Governor of New York after she beat Republican opponent Lee Zeldin in the November 2022 election.

While she was only elected in November, Hochul, who was previously the Lieutenant Governor of New York, had assumed the role of Governor in September 2021 in the wake of Andrew Cuomo's resignation.

Despite being generationally removed from Ireland, Kathy Hochul - who was born Kathleen Mary Courtney - has frequently said that her Irish heritage was a key part of her upbringing.

Wonderful meeting with @MichealMartinTD this afternoon.

New York and Ireland share a strong bond, and it’s personal for me as a proud granddaughter of Irish immigrants.

I look forward to working together to combat COVID and come back stronger.🇮🇪 pic.twitter.com/5ZlH7qLToM

She further said in the video: "I will say like all good Irishmen and Irishwomen, I love a good fight, especially if it's for the people of my beloved state.