Annie Moore was the first immigrant of more than 12 million who sailed past the Statue of Liberty and arrived in New York City. 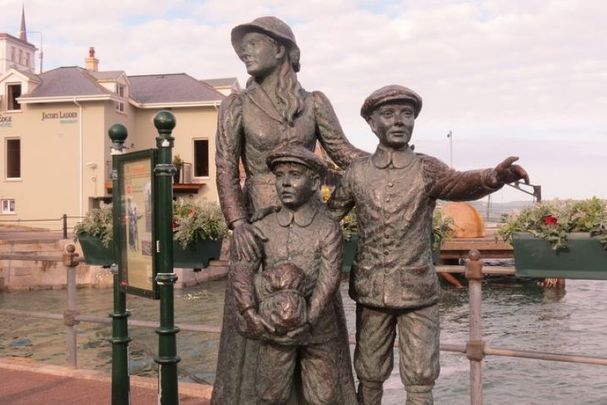 A statue dedicated to Annie Moore and her younger brothers in Cobh. Ireland's Content Pool

The Ellis Island facility, in the shadow of the iconic Statue of Liberty, was a gateway for more than 12 million immigrants who arrived in New York City to start their new life in America. From 1892 to 1954 this facility was the United States' largest immigrant inspection center. The facility is an important New York landmark for Irish Americans as more than 3.5 million Irish immigrants were processed at Ellis Island during its 62 years in operation.

The original structure was three-stories tall and built of Georgia pine. It opened with a great celebration on January 1, 1892, and, on its first day, the station processed 700 immigrants, from three large ships, at the docks.

Annie Moore was the first immigrant to experience this, presumably terrifying, procedure at Ellis Island. Each immigrant underwent a health check to ensure they did not carry infectious diseases into America and were interviewed before being sent by ferry to Manhattan.

The 17-year-old Moore set sail from Queenstown (the port now called Cobh), County Cork with her two brothers, Anthony and Phillip, on the ship S.S. Nevada. They were coming to America to meet their parents who had arrived in New York two years earlier. The three siblings spent 12 days at sea, including Christmas, and arrived in the harbor on Dec 31.

She was greeted by officials who gave her a $10 gold coin and all three Moore children were reunited with their parents, according to the Statue of Liberty - Ellis Island Foundation.

Moore remained in New York living, for the most part, at 99 Cherry Street in the city. In late 1895 she married Joseph Augustus Schayer, a young German-American who worked at the Fulton Fish Market. They married at St. James Church. She went on to give birth to at least ten children and died of heart failure, at the age of 50, in 1924.

She is buried in Calvary Cemetery in Queens. Her grave is marked by a Celtic cross made of limestone imported from Ireland.

In both Cobh and at Ellis Island there are statues of Annie Moore. Her image and her family’s story, as the Statue of Liberty - Ellis Island Foundation puts it, “will forever represent the millions who passed through Ellis Island in pursuit of the American dream.”

During its first year, 450,000 immigrants were processed at Ellis Island. On June 15, 1897, a fire, possibly caused by faulty wiring, burned the island's wooden structures to the ground. Although there was no loss of life due to the fire, most of the immigration records dating back to 1855 were destroyed. In the first five years, it is believed that about 1.5 million immigrants were processed. After the fire plans were immediately put in place to replace the facility and a fireproof station was built.

Of course, immigrants had been arriving in New York long before the opening of Ellis Island. Before the 1890s individual states, rather than the federal government, regulated immigration into the US. The New York immigration station was located at Castle Garden in Battery City from 1855 to 1890. It’s estimated that approximately eight million immigrants, mainly from the north and west of Europe, passed through this center.

In the 1800s, including the period of Ireland’s Great Hunger, political instability, restrictive religious laws and deteriorating economic conditions in Europe sparked the largest mass human migration in the history of the world. The facilities at Castle Garden could not cope with this influx. They were ill-equipped and this problem was compounded by corruption and incompetence, which were commonplace. The federal government saw fit to intervene and started work on Ellis Island.

The footage below, from 1906, entitled "Arrival of immigrants, Ellis Island,” gives us a glimpse into that time. It shows people arriving with their possessions after having been processed.

The Irish American story, which spans hundreds of years of immigration, is strongly linked with Ellis Island. The primary trigger for the influx of Irish into America was the Industrial Revolution, from the 1760s, as farmers and laborers lost their livelihoods and Europe became more industrialized. Of course, the period of the Great Hunger in Ireland, from 1845 to 1850, is the most well-known period of mass immigration from Ireland when more than a million fled to the United States.

However, immigration continued through the 1900s with the Irish in search of a better life during periods of hardship including right up to the 1980s and even into the more recent recession. It’s little wonder that today 39.6 million Americans claim Irish ancestry, according to the latest Census.

Ellis Island closed for good in 1954. The last person to be processed was a Norwegian merchant seaman by the name of Arne Peterssen.

Although it shut its doors 61 years ago, Ellis Island remains part of the Irish psyche. It's regularly referenced in cultural works, most recently in the hit movie “Brooklyn,” based on Colm Toibin's novel in which the protagonist Eilis Lacey is processed at Ellis Island twice.

Perhaps one of the most poignant modern references to the immigration center is Mary Black’s song “Ellis Island,” featured on the 1998 album "Song for Ireland." The mournful song tells the tale of a pair of lovers who are being separated by emigration. As the chorus says “last call for Ellis Island, These are the last words I'm ever gonna hear you say.”

Today Ellis Island is a place of pilgrimage and education, where visitors can see where their ancestors landed as they experienced America for the first time.

To plan your visit and research your own ancestors visit www.libertyellisfoundation.org.

Did any of your ancestors come through Ellis Island?