Trump gloats as Irish American Congressman Joe Crowley, fourth in line in the Democratic Party in the House, loses out to a newcomer. 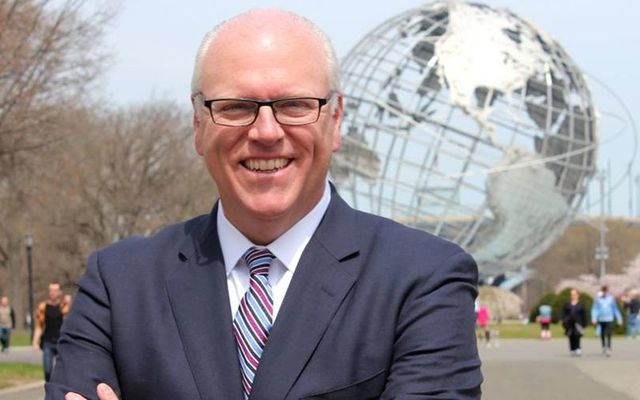 Joe Crowley loses out to a newcomer. Facebook / repjoecrowley

In a massive upset, powerful Irish American Congressman Joe Crowley, 56, was sensationally beaten in the Democratic primary in his Queens, New York, district by a complete outsider.

President Trump took to Twitter to gloat, “Wow big Trump hater Congressman Joe Crowley, who many expected was going to take Nancy Pelosi’s place just LOST his primary election. In other words, he’s out! That is a big one that nobody saw happening. Perhaps he should have been nicer, and more respectful, to his president.”

Wow! Big Trump Hater Congressman Joe Crowley, who many expected was going to take Nancy Pelosi’s place, just LOST his primary election. In other words, he’s out! That is a big one that nobody saw happening. Perhaps he should have been nicer, and more respectful, to his President!

Crowley’s defeat came at the hands of a surprise challenge from the left; 28-year-old Alexandria Ocasio-Cortez. Crowley had run unopposed for his last fourteen years in the Democratic primary.

In Crowley’s concession statement, he congratulated Ocasio-Cortez and said he looked forward to supporting her. He also played “Born to Run” on an acoustic guitar, dedicating his performance to the candidate who’d just defeated him.

He was fourth in line in the Democratic Party in the House, where he was Chairman of the Democratic Caucus and a powerful figure on the Ways and Means Committee.

Joe Crowley (@JoeCrowleyNY) is playing guitar and singing "Born to Run", dedicated to the candidate who just primaried him, Alexandria Ocasio-Cortez (@Ocasio2018)

If Dems had won back the house, he was tipped as a future speaker and seen as by far the youngest contender among the current leadership group. There had been speculation he would challenge Nancy Pelosi for the leadership.

Crowley was deeply involved in Irish issues, a frequent visitor to Ireland and was a standard bearer on issues such as immigration reform.

Crowley, despite having fundraised nearly $3 million, lost to a first-time candidate who described herself politically as a Democratic Socialist. She ran on a far-left, Medicare-for-all, federal jobs guarantee, and cracking down on Wall Street abuse platform. She raised $600,000 through small-dollar donors. Her viral introduction video, where she spoke plainly about herself and claimed Crowley was not a resident of the district, went viral.

Crowley was hurt by his Wall Street ties, according to reports, leaving himself open to accusations of being too cozy with bankers.

The race was called just before 10 pm for Ocasio-Cortez.

Occasio-Cortez went to Boston University and worked for Ted Kennedy’s office for a short time. She is now considered a shoo-in in the general election. She was born in the Bronx to a working-class family and her mother is Puerto Rican.

The district, which spans parts of the Bronx and Queens, is 70 percent people of color and 50 percent Latino and has changed dramatically during Crowley’s time in office.

We endorsed @Ocasio2018 because we believe she is the future of the Democratic Party. Today, she ousted 10-term incumbent Rep. Joe Crowley. Here in New York, the progressive revolution has begun, and we could not be more proud to be a part of that movement. #ForTheMany pic.twitter.com/uEEbbj8qaI

It is is the biggest primary upset since then-Majority Leader Eric Cantor was defeated by David Brat in a Republican race in Virginia in 2014.