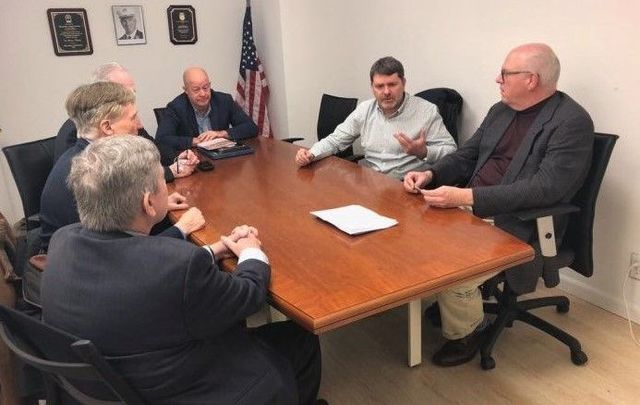 Mark Thompson speaks to AOH representatives and Congressman Joe Crowley during the Emergency Tour of the East Coast early this year, lobbying for US intervention with the British Government on behalf of victims of the conflict.

British Ambassador to the U.S. Kim Darroch is in receipt of a letter from 16 members of Congress who joined together to express concern about hundreds of families still waiting for legacy truth and justice.

The bipartisan Congressional initiative follows a recent visit by Mark Thompson of the Relatives for Justice group in the North. The tour was organized by New York State Ancient Order of Hibernians, and supported by an array of Irish-American organizations including the Irish American Unity Conference and Brehon Law Society.

Members of Congress cited issues including the denial of funding for legacy inquests and investigations, misuse of national security to block information and proposals of a statute of limitations amnesty.

The letter to Darroch, dated April 16, stated that the “search for a way to deal with the past has gone on now for many years. Hundreds of families who lost loved ones continue to wait for access to truth and justice, even though European law agreed to by member states requires an effective investigation into these deaths.” The letter adds, “In particular, we are concerned by the ongoing absence of adequate resources for coroners’ investigations into deaths during The Troubles. We are also concerned by a proposal in Westminster for a statute of limitations for British military personnel. There are additional concerns at the approach of the United Kingdom on national security issues in relation to the essential work of the proposed Historical Investigations Unit in investigating the hundreds of outstanding cases…the establishment of the Stormont House legacy framework and addressing legacy inquests in the North is long overdue.”

Martin Galvin, chair of the New York State AOH Freedom for All-Ireland committee, said of the letter, “We welcome this congressional scrutiny and will monitor and provide information in relation to the British government's response.

"It seems that as victims use crown justice mechanisms to get legacy truth, the British are starving their own courts, inquest judges and Ombudsman investigations of funding while moving towards pardons dressed up as statutes of limitations.

Galvin added, “Since Mr. Thompson's visit, a judge has ruled that former First Minister Arlene Foster had unlawfully blocked funding for legacy inquests by demanding political agreement before discussing funding to fulfill the state's obligations to legacy victims. We believe that American political pressure on the British can help make a difference for legacy victims in their long fight for truth and justice.”

Thompson expressed hope that the letter will prompt action by the British government.

“Hopefully the letter, with its direct no nonsense content, will cut through the pretense and cynical games being played out by London and the NIO as they continue to stall and prevent implementation of legacy agreements reached in December 2104,” he said in a statement.

“Families have waited far too long for accountability. Legacy, legal obligations and human rights, sit quite separately from the politics and political vacuum and must be addressed whether or not the political institutions are reestablished.”