Irish American politicians team up to fight for voters’ rights

Representatives Joe Crowley and Brendan Boyle are jointly introducing a bill before Congress that will make it easier for newly-minted American citizens to vote. 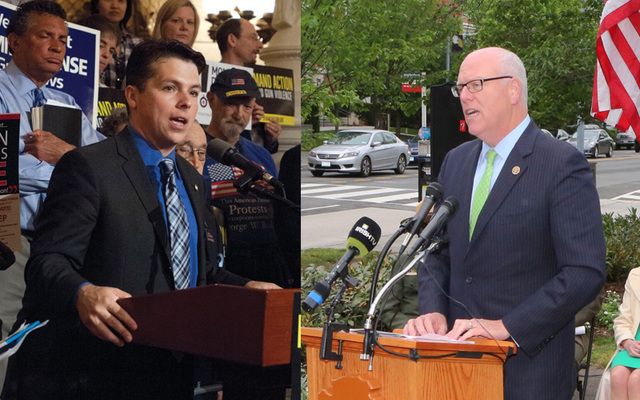 One is a possible future Speaker of the House of Representatives.

The other is a rising star on Capitol Hill, and for sure in Irish America.

Representatives Joe Crowley and Brendan Boyle are jointly introducing a bill before Congress that will make it easier for newly-minted American citizens to vote.

It’s a simple enough idea, but in a time when there are accusations of attempts to suppress voting across the nation’s political landscape, the move might be a little more politically complicated than it might first appear.

Boyle, a Democrat from Philadelphia, and Crowley, that party’s House Chairman, are sponsoring the Citizenship Empowerment Act.

The legislation would require that all newly sworn-in U.S. citizens be provided voter registration forms at naturalization ceremonies.

Currently, according to a release from Rep. Boyle, only some state and local election officials provide such materials to newly sworn-in citizens.

The proposed act, H.R. 3113, would require officials to provide voter registration forms in the citizenship packets provided to all newly sworn-in U.S. citizens, and allow election officials to set up informational tables outside naturalization ceremonies.

“The right to vote is the foundation of our democratic system.  We should make it easier, not harder, for citizens to vote or register to vote whenever possible,” said Congressman Boyle.

“We should do all we can to provide all citizens a fair opportunity to participate in our democracy – and in fact encourage them to do so – regardless of the location they happen to be naturalized as a U.S. citizen.

“The first step of a truly representative democracy is participation.  I am proud to introduce this legislation with Joe to cap off Immigrant Heritage Month and commemorate July Fourth.”

Congressman Crowley is very much on the same page.

“We should do everything within our power to make it easier for Americans to vote, as that is the fundamental tool to ensuring a more perfect union,” said the New Yorker.

“Newly sworn-in Americans have demonstrated their commitment and dedication to our country, and they are often eager to make their voices heard.  Providing voter registration forms at naturalization ceremonies would go a long way into making that a reality.

“I applaud Congressman Boyle for his leadership on this important issue and hope my colleagues will be inspired by the Independence Day Holiday to support this legislation.”

Crowley is the fourth-highest ranking member of the House Democratic Leadership.

Read more: Nancy Pelosi must go and Rep. Joe Crowley must take over her jo

Providing a new citizen with a voter registration form at a naturalization ceremony is currently allowed, and in fact conducted in some states, but it is not required by federal law, Rep. Boyle’s release pointed out.

“This is an obvious disparity, wherein one new U.S. citizen can be sworn-in at one location and immediately given the opportunity to register to vote, while another may have to jump through multiple hoops to track down the necessary paperwork,” it stated.

The idea for the legislation was first expressed to Congressman Boyle by Philadelphia election official, Lisa Deeley, who had received the suggestion at a town hall-style community meeting.

In this regard, the idea is very much a grassroots initiative.

Congressman Boyle, noted the release from his office, is the son of an Irish immigrant and has been an outspoken advocate for protecting and expanding voting rights, both in the Pennsylvania state legislature, and the U.S. Congress.