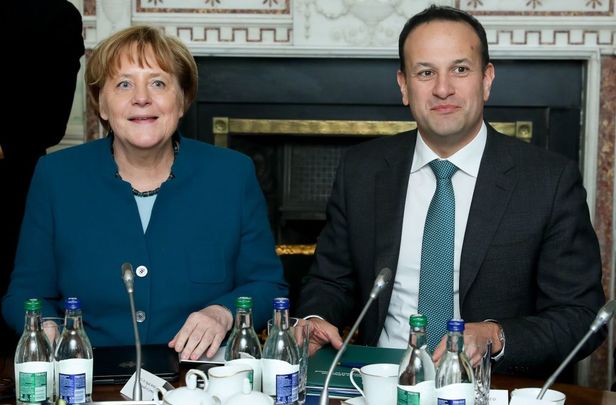 German Chancellor Angela Merkel, who is in Dublin on Thursday, is being warned by Irish politicians that a no-deal Brexit and a hard border will mean a return to violence along the Northern Irish border.

Merkel is visiting Ireland as a show of solidarity in the lead-up to Brexit and to get a “clearer picture” of Ireland’s Brexit preparations.

The German leader spoke of her own time behind the Berlin wall during the Cold War after meeting with a group of Irish people from a border community.

“We will simply have to be able to do this. We hope for a solution. We have to be successful," Merkel said in a joint press conference with Irish Taoiseach Leo Varadkar, claiming that “where there’s a will there’s a way” regarding the maintenance of an open border post-Brexit.

“For 34 years I lived behind the Iron Curtain so I know only too well what it means once borders vanish, once walls fall,” she added.

Ahead of the German Chancellor’s Irish visit, Irish Senator Mark Daly had requested that Merkel, as well as the entire EU, be aware that any demand for infrastructure or a hard border in the event of a no-deal Brexit would result in a return to violence.

Senator Daly worked with a team of UNESCO Chairs including Professor Pat Dolan and Professor Mark Brennan on a report that worked to analyze the impact of a no-deal Brexit. Michael Ortiz, who served as the first US diplomat on the issue of Countering Violent Extremism in the US State Department during the Obama administration, also provided input.

Senator Daly said: “The report states that the only question in the event of a return to a hard border will be the scale of the violence.”

He added: “This research and the report, we have published, identifies and highlights the responsibility of the UK government to stand by the backstop that they proposed.

“This will ensure that the peace process on this island is not jeopardized by a no-deal Brexit related hard border.

"The German Chancellor & the EU need to ensure there is no return to a hard border in light of the facts outlined in the UNESCO chairs report.”

This research is based on one of the recommendations in the report adopted by the Parliamentary Committee on the Implementation of the Good Friday Agreement, “Brexit and the Future of Ireland, Uniting Ireland and Its People in Peace and Prosperity,” compiled in 2017 by Senator Mark Daly.

The research highlights the issue of ‘Loss of memory of harm’ among the ‘Agreement Generation,’ a term which applies to the generation born just before or since the 1998 Good Friday Agreement. This generation has no first-hand knowledge of the horrors of conflict and some will have been given a romanticized account of The Troubles.

The research also emphasizes the serious problems facing the present generation, especially those who live in the most disadvantaged loyalist and Republican areas.

The full report entitled ‘Northern Ireland Returning to Violence due to a Hard Border as a result of  Brexit or a Rushed Border Poll: Risk to Youth’ can be accessed online.

Read More: To solve the Brexit crisis, time to put special status for Northern Ireland back o the table

He warned targets could “include courthouses, government buildings, and police stations” and added that “it would be to the dissident’s benefits to see the military return to the street.”