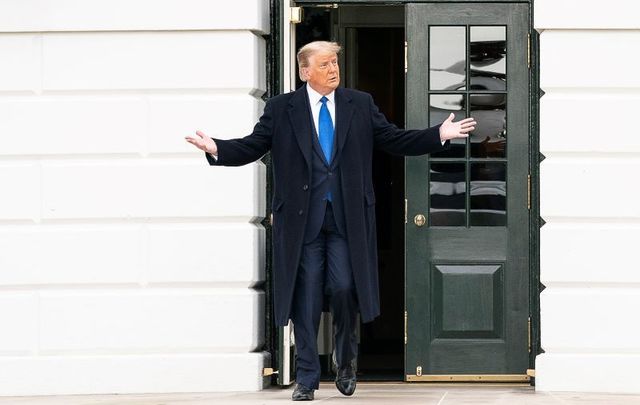 October 27, 2020: President Trump greets guests on the South Lawn of the White House prior to boarding Marine One en route to Joint Base Andrews, Md. to begin his trip to Michigan, Wisconsin, Nebraska, and Nevada. Public Domain / White House Flickr, Joyce N. Boghosian

Two People Before Profit politicians have called upon both the Irish government and Stormont to not offer Donald Trump congratulations should win today’s US presidential election.

Gerry Carroll MLA and Bríd Smith TD, both of the socialist political party People Before Profit, issued a joint statement on November 2, the day before Americans head to the polls to elect their next president.

Gerry Carroll, MLA for West Belfast, said: "The re-election of Donald Trump would boost the far-right, racists and misogynists across the world. The Stormont Executive should have no truck with this, and should not engage with such a presidency by issuing any message of support or congratulations.

"It was a mistake for the leaderships of all government parties North and South to entertain Special Envoy Mick Mulvaney earlier this year, which legitimised the presidency of Donald Trump.

“We are calling on those parties to do better - stand with those who are most vulnerable under Trump's reign, and against his damaging and racist policies."

"The re-election of Donald Trump would boost the far-right, racists and misogynists across the world. The Stormont Executive should have no truck with this, and should not engage with such a presidency by issuing any message of support or congratulations"https://t.co/PFVlr6ljO2

Bríd Smith, TD for Dublin South Central, said: “If Donald Trump, this peddler of hate, wins the upcoming US Election, the Irish Government should distance themselves from him.

“Over the course of his term of office in the White House Trump has fanned the flames of racism in America. He has emboldened the most toxic elements of far-right nationalism in the US and, on countless occasions, legitimised the disgraceful rhetoric and actions of these groups.

“No Irish Government which purports to stand for decency and respect should dignify this man by congratulating him as US President. The Irish government, if Trump wins the election, must make a stand against Trump and his despicable, sexist, and racist record which is environmentally catastrophic and a disaster for the American people in regard to the Covid crisis in that country.”

At the time of publication, at least 100 million Americans had already voted in the US presidential election, according to the US Elections Project. It is unclear as of yet whether or not a winner will be declared today, election day, November 3.