Irish language legislation being introduced in UK Parliament is being cautiously hailed as a "historic advancement" by Irish language activists. 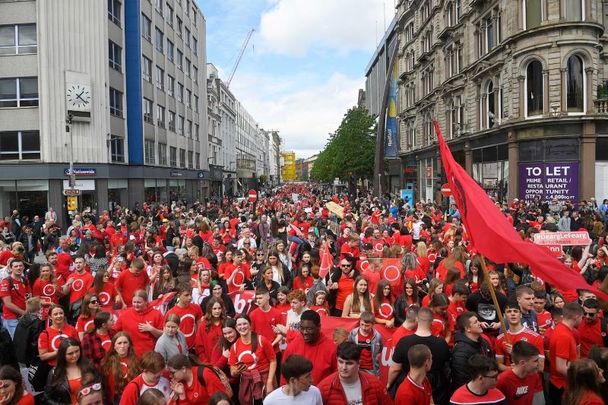 May 22, 2022: An estimated 20,000 people marched in Belfast calling for Irish language equality in Northern Ireland. An Dream Dearg, Facebook

The Identity and Language (Northern Ireland) Bill will amend the Northern Ireland Act to allow for the establishment of three new public authorities in Northern Ireland, including an Office of Identity and Cultural Expression to promote cultural pluralism and respect for diversity, alongside Commissioners on the Irish language and the Ulster Scots/Ulster British tradition.

The Northern Ireland Office said on Wednesday that with the new legislation, Irish language, which will be granted official status in Northern Ireland, will be protected by a new Commissioner, tasked with developing best practice standards for public authorities to follow.

These standards, which will be subject to approval, will help to facilitate interaction between Irish-speaking service users and public bodies.

A further commissioner will work to enhance and develop the language, arts, and literature associated with the Ulster Scots and Ulster British tradition, and will promote Ulster Scots services provided by public authorities.

In addition to the legislation, the UK Government has also announced the delivery of two of its own New Decade, New Approach commitments - official recognition of Ulster Scots as a National Minority under the Framework Convention for the Protection of National Minorities, and £4 million to An Ciste Infheistíochta Gaeilge, the Irish Language Investment Fund.

The Identity and Language (Northern Ireland) Bill can be read online here.

“The introduction of this Bill represents a significant milestone, not just in the continued delivery of New Decade, New Approach, but in laying down a new cultural framework for the people of Northern Ireland," Secretary of State for Northern Ireland Brandon Lewis said on Wednesday.

“This legislation is carefully balanced, as negotiated by all parties, to ensure everyone in Northern Ireland benefits.

“Not only will the legislation faithfully deliver on the measures within New Decade, New Approach, it will also, importantly, ensure the principles of respect and tolerance, as stated in the Belfast (Good Friday) Agreement, continue to be realised.”

The introduction of the Identity and Language (Northern Ireland) Bill comes just days after thousands of people marched through Belfast demanding Irish language equality in a rally organized by the Irish language campaign group An Dream Dearg.

On Wednesday, An Dream Dearg activists were at Stormont to mark the introduction of the long-awaited legislation.

"New cultural and language legislation has been hailed as an historic advancement for the Irish language community. Described as a staging post on a long long road. @dreamdearg @ptierney89"

"We would consider this an historic advancement for our community," An Dream Dearg campaign spokesperson Pádraig Ó Tiarnaigh told RTÉ on Wednesday.

"It is a staging post on our long, long road towards language rights and equality, and we recognise it as such.

"It doesn't bring us to where we ultimately want to be, stacked up against the Welsh model for language rights for example, it does fall well short and does fall short of what we were promised at St Andrew's, but for the 20,000 people that came out on the streets of Belfast on Saturday, for the generations of people who have walked this road with us for decades, today belongs to them.

"This is a day to celebrate and recognise all of that work and those pioneers who challenged the state when it wasn't cool and when people said, no, no, no."

Conradh na Gaeilge, which promotes the Irish language, also reacted to the news that the legislation was to finally be introduced. President of the organization Paula Melvin said: “The Irish language community has been fighting for these rights for decades and in that regard to see the Irish language be afforded official status here for the first time is indeed historic."

Melvin added, however: "But let’s be clear, this is only the beginning of the legislative journey for this bill. Painful experience with the British Government has taught us to take nothing for granted. Until we see this Bill fully enacted and indeed implemented in practice, we will continue to push ahead with the campaign.”