The Protestant paramilitary outfit the Ulster Volunteer Force (UVF) is suspected of stepping up threats to security.  And separately, Irish language campaigners are furious at a British government-ordered delay in language legislation until after the election. 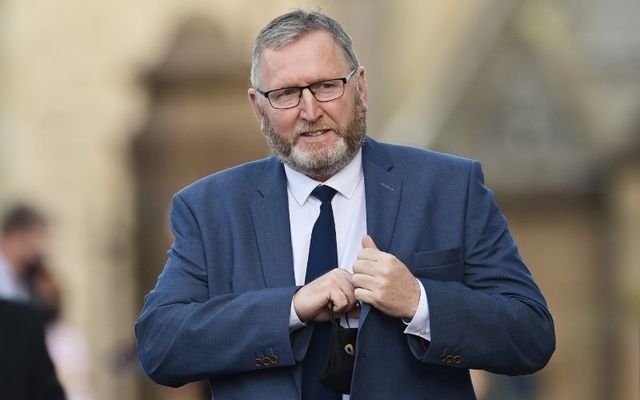 Crisis has struck Northern Ireland on two fronts in the build-up to the May 5 Stormont Assembly elections date.

The Protestant paramilitary outfit the Ulster Volunteer Force (UVF) is suspected of stepping up threats to security.  And separately, Irish language campaigners are furious at a British government-ordered delay in language legislation until after the election.

Security officials believe the UVF may be planning further attacks in the lead-up to the Northern Ireland Assembly election.

Beattie’s office in Portadown, Co. Armagh, was attacked when a window was smashed on Sunday.  That was two days after Coveney was evacuated while speaking about the importance of reconciliation in Northern Ireland at an event organized by the John and Pat Hume Foundation in Belfast.

Coveney was evacuated amid fears a bomb was planted in a nearby hijacked van which the driver was earlier forced to drive to the area by two gunmen. Police later said the bomb was a hoax but the intention was to cause maximum disruption. Their assessment was that the UVF was responsible.

Beattie said the Sunday attack on his constituency office was “an inevitable consequence” of his position on protest rallies against the Northern Ireland Brexit Protocol.  He said the “cowardly attack” followed an announcement that he will no longer be attending the rallies.

Several rallies have been organized by unionist and loyalist representatives in opposition to the Protocol which many unionists want scrapped as they regard it as forming a trade border in the Irish Sea between Britain and Northern Ireland. The Protocol was agreed in Brexit talks between the EU and the U.K. to ensure there would be no hard border between the North and the Republic.

Beattie told BBC Northern Ireland, “It is now clear that anti-Protocol rallies are being used to raise the temperature in Northern Ireland and adding to tensions that now see a resurgence in UVF activity.

“The Ulster Unionist Party will not be part of raising tensions or the temperature by bringing people onto the streets with intent to harness anger.”

Separately, a spokesperson for Coveney said ministers’ security is a matter for the gardai, and both the gardai and PSNI officers acted very quickly during the hoax threat at the Coveney event.

It claimed an agreement in January 2020 included commitments to introduce measures protecting the Irish language and Ulster-Scots within 100 days.

Instead, there were several delays and in a letter dated March 22 this year, the chair of the Northern Ireland Affairs Committee, Simon Hoare, was informed that the British government would not introduce the legislation until after the Stormont elections in May “due to pressures on the parliamentary timetable”.