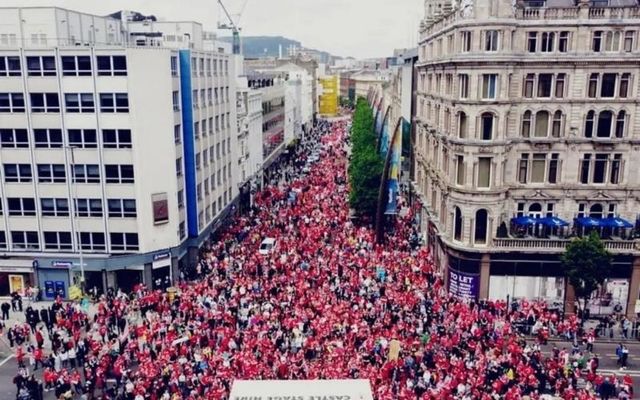 Thousands of red-clad Irish-language advocates marched through Belfast on Saturday afternoon to call for protections for the Irish language in Northern Ireland.

The rally began at Cultúrlann McAdam Ó Fiaich in West Belfast at 1 p.m. on Saturday and made its way to Belfast City Hall, where speakers and singers addressed the 7,000-strong crowd.

Around 25 buses brought demonstrators to the event from across the island of Ireland.

The An Lá Dearg (the red day) protest saw large crowds marching through the city demanding "language recognition, respect, and rights" in addition to calling on the UK Government and the Northern Ireland Executive to implement the Irish Language Act as had previously been promised in the New Decade New Approach deal in 2020.

The act promised to introduce an Irish-language strategy in addition to a commitment to an Ulster-Scots language, heritage, and culture plan as part of an agreement that helped restore power-sharing in Northern Ireland after a three-year impasse.

However, the language act has yet to be implemented amid continued political contention over the issue.

Conchúr Ó Muadaigh, a spokesperson for An Dream Dearg, told the Irish Independent that the act was "long overdue".

"An Dream Dearg has built a grassroots movement that has pushed the Irish language from the margins to the very center of political and civic discourse both here and internationally, a movement that has spoken truth to power and ensured our community would no longer be treated as second class citizens, marginalized or excluded. Those days are gone for good," Ó Muadaigh told the Irish Independent.

"The Irish Language Act is long, long overdue. Our community cannot and must not be made to wait any longer for the same language rights enjoyed by citizens across these islands."

Ó Muadaigh said the group was "blown away" by the level of support at Saturday's demonstration and described it as the "biggest Irish-language demonstration of a generation".

An bhfuil tú at éisteach Bojo?
Are you listening Bojo?
Acht Anois!! pic.twitter.com/25OYfehBi8

Five-year-old Dáithí Mac Gabhann was among those who addressed the crowd at City Hall, while other speakers included Irish-language youth worker Katie Irvine and Dónal Ó Cnaimhsí from the Gaoth Dobhair Gaeltacht in Co Donegal.