Irish Americans astonished by the demonization of Sinn Féin

It is time for Sinn Féin's inclusion, not exclusion. 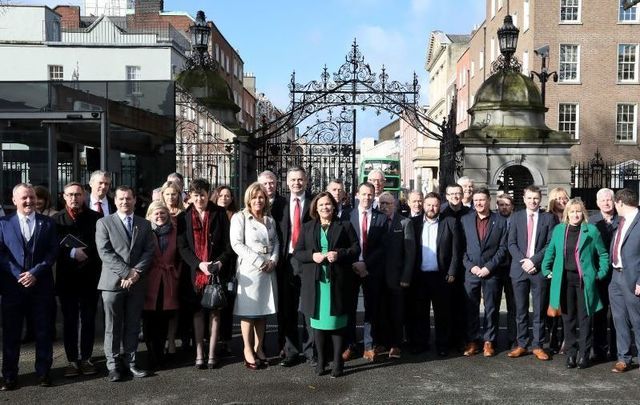 First Day of the 33rd Dail. Sinn Fein President Mary Lou McDonald surrounded by supporters and the media while heading to Leinster House for the first day back as the Dail returns from the elections on February 20, 2020. RollingNews.ie

Fianna Fáil and Fine Gael should get over their fixation about Sinn Féin having the temerity to challenge them on their own doorstep, says Niall O'Dowd.

Editor's Note: Niall O'Dowd, founder of IrishCentral and its sister publications The Irish Voice newspaper and Irish America Magazine, penned the below piece, "Irish America is hostile to the exclusion of Sinn Féin from government" which was published in The Irish Times on March 4.

Irish Americans are looking on in astonishment at the full-throated demonization of Sinn Féin by the two leaders of Fianna Fáil and Fine Gael and what seems like the majority of media commentators in Ireland.

After decades of Irish leaders encouraging Americans to get Sinn Féin to do the right thing and become full participants in the peace process, the political establishment in Ireland is now sending out the mother of all mixed messages.

Former congressman Bruce Morrison, a key figure in the American role in the Irish peace process, summed up Irish American sentiment best in a recent interview with IrishCentral.

“The continuing attempts to quarantine Sinn Féin is a direct attack on their democratic mandate and the wishes of their voters,” he said. “When we urged them forward to ceasefire and disarmament . . . we said peaceful politics was the way forward.

“Now that they have done that, the previously dominant parties are trying to change the subject to the past – It makes no sense.”

It is quite an onslaught by the political leaders and many in the media. The tenor of the anti-Sinn Féin columns makes one think many of the commentators and party leaders would almost prefer Sinn Féin had never given up violence, as they swaddle themselves in self-righteousness.

As expected, the media revisionists are truly angry that their cock-eyed view of history, where Sinn Féin are incapable of political thought and are just a bunch of goons who threatened the legitimate Northern Ireland state, has been discredited. Their theory is destined for the dustbin of history which makes it all the more strange to see leading politicians suddenly begin flogging that long-dead horse

In the process, they are draining much of the goodwill Irish Americans have for Irish political leaders. We believe it defies logic to face backwards after so much has been accomplished.

The notion that it is not okay to treat with Sinn Féin now is met with further disbelief in America where we see Arlene Foster photographed with Michelle O’Neill in the restored Stormont government.

The two will also shortly visit the White House together for Saint Patrick’s Day causing even more head-scratching about what the attempt to exclude Sinn Féin in the South is about.

Irish Americans understand and acknowledge how difficult that coming together was to achieve for both Northern parties but to have Fine Gael and Fianna Fáil place that uncertain arrangement under more pressure for domestic political advantage is a sorry sight. After all, Fianna Fáil were in government in Ireland just six years after turning away from violence in 1932.

Perhaps there is some level of purity that only the leaders of Fine Gael and Fianna Fáil can aspire to but the DUP can clearly live with Sinn Féin in government and there is no reason the Republic parties can’t either.

There is the danger of Irish American sentiment slipping back into the old “them versus us” mentality if this nonsense keeps up from Ireland. Disagree with Sinn Féin all you like but scaremongering and demonizing about the past for short-term political advantage is a sad sack approach

The strange part is that one of the most powerful voices advocating bringing Sinn Féin into the process and looking forward and not to the past for the greater good was Micheál Martin when he was minister for foreign affairs from 2008 to 2011. He frequently addressed Irish American groups in that vein and impressed with his sincerity on the issue.

Perhaps Martin gave the game away during the debates when he asked what Sinn Féin were doing coming “down here”. Fianna Fáil and Fine Gael seem dead set on keeping the mindset of partition where Irish nationalism stops at the Border.

It is worth recalling that the effort to bring Sinn Féin into politics and leave the old ways behind was immense. In America, it involved a herculean struggle in getting an American president, Bill Clinton, to take sides with the Irish over the 200-year-old “special relationship” with Britain.

The key result was a US visa for Gerry Adams and an IRA ceasefire that Adams himself has stated would never have happened at the time but for Irish American resolve and involvement.

The subsequent path to politics North and South was paved with enormous difficulty. It was my experience that many men and women in Sinn Féin showed extraordinary bravery and courage in moving on from the bloody past despite the efforts of extremists, which continue to this day, to derail and yes, kill them.

As for the “shadowy men”, Bruce Morrison and I met face to face with some of them a few times when acting as intermediaries for the White House in the lead-up to the IRA ceasefire. What they promised was an IRA ceasefire and a permanent turn towards politics if in return their demands were delivered. They were and true to their word the campaign ended.

Did all violence stop?

No, but the progress made since the Good Friday Agreement of 1998 crowned by the recent return of powersharing is a huge success story not a scary, bogeyman tale as Fine Gael and Fianna Fáill are recounting it.

It is clear the voters in the Republic of Ireland, much to the chagrin of the revisionists, have also realised it is time to dwell on the future, not the past. The Republican bogeyman doesn’t scare any more – especially among young voters.

Sinn Féin’s success in the elections did not come as a great surprise to long-term observers of how they operate in America. There is no secret formula just clear objectives, plain hard work, and commitment which is what they have shown in building their base here.

Fianna Fáil and Fine Gael should get over their fixation about Sinn Féin having the temerity to challenge them on their own doorstep.

They are certainly not doing the cause of Ireland much help in America with their divisive and inflammatory rhetoric. “Ourselves alone”, once the Sinn Féin motto, now seems the new catch cry of the two traditional political parties – but that day has now gone. It is time for inclusion, not exclusion.